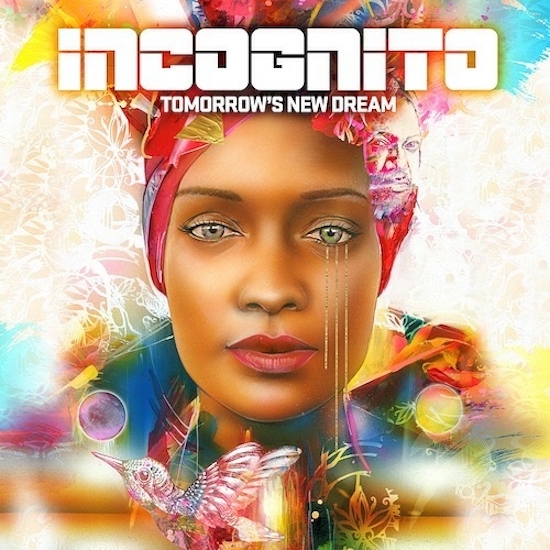 Some groups can't stay together for 40 days much less 40 years. However, Incognito has proven their staying power, and 2019 marks the occasion of their 40th anniversary. Formed in 1979 by visionary Jean-Paul "Bluey" Maunick, the groovy collective of singers and musicians is celebrating this milestone with a new album and world tour. The follow-up to 2016's In Search Of Better Days, Incognito's 18th album, Tomorrow's New Dream, will be released on November 8th. To get ready for its drop, they've already provided a taste of the project on the first two singles, "The Weather Report" featuring Take 6 and "For The Love Of You" with Maysa and Phil Perry.

Legendary sextet Take 6 bring their signature harmonies to the dance floor on the Latin jazz-infused "The Weather Report." The song is a departure from their a cappella and gospel roots, but they sound as heavenly as ever over the Cogs' uptempo sound bed of keys, percussion and bass. "The weather report says rain / But I don't see the clouds, you see / The contradiction is so clear, we're not on the same page," the fellas sing on the first verse, making you wonder what's in the forecast for this relationship.

Maysa  – the undisputed voice of Incognito – and Phil Perry keep the party jumping on the group's second single "For The Love Of You." They serenade each other with sweet nothings over twinkling piano, thumping bass, horns and strings. "I can't wait to (just can't wait, baby) / Be with you (want to see you, baby)," they sing on the chorus, leaving no question about the love present in this groove-heavy duet.

Incognito mainstays Imaani, Vanessa Haynes, Joy Rose and Mario Biondi are back in the mix, and the group welcomes vocalists James Berkeley, Cherri V and Roberta Gentile into the fold. In the middle of everything and holding it all down is bandleader Bluey who has a lot of music still left in him 40 years later.

We're a couple of weeks away from the release of Tomorrow's New Dream, which is currently available for pre-order on Amazon and Apple Music. In the meantime, Incognito's Tomorrow's New Dream World Tour is already underway. The U.S. leg kicked off this week in Charlotte, North Carolina and the next few days will find them in Chicago, Detroit, New York City and Philadelphia, to name a few cities they hit stateside. The band will hop back across the pond in November for the European leg before jetting to Japan for the tour's Asian leg in December. For the full list of tour dates and links to buy tickets, visit Incognito's website.