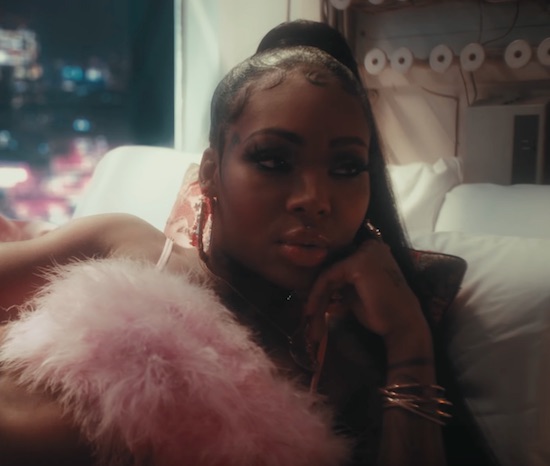 Singer/songwriter/R&B hot girl Summer Walker may play coy during interviews, but she’s not afraid to let her music do the talking for her, revealing layers of truth and experience that warm your soul like heavy blankets on your bed during winter. That’s the feeling you get when she allows herself to be vulnerable, like on her latest single “Playing Games” with Bryson Tiller.

“Playing Games” is a '90s R&B-style ballad about longing for a significant other to stop treating you insignificantly. Instead of treating Summer like the queen she is, her guy is playing in her face and not even doing the basics. “All I ever asked was you to / Show me some love, kisses and hugs / No, I never had an issue / Go to the club with your boys, baby,” she laments over the intoxicating London on da Track-produced groove. Summer even repurposes Destiny's Child's "Say My Name" chorus on the "Playing Games" chorus to get homeboy together. Tiller comes through on the third verse playing the role of boyfriend #2 and professing that he's different and will treat her as such. "Me, I'm never actin' shady / You will always be my baby," he convincingly sings as the song fades out.

For the "Playing Games" music video, Summer is seen lounging in her high-rise apartment at the onset, staring out the window at a futuristic cityscape. She looks cool, calm and collected in the next scene as she sings the lyrics into a telephone, but we soon see an unexpected sight when the camera pans out to reveal a man tied up in ropes and hanging from the ceiling above her. The scene then changes to Summer watching that play out on a security video while sitting on another man's lap. Just when you think she may have moved on, we realize that he has duct tape over his mouth. More men follow in compromising positions, and Summer remains unbothered as she enacts her own brand of revenge on those who've played with her heart. Bryson doesn't appear in the visual, which is a good thing because there's no telling what his fate might have been. The Christine Yuan-directed clip ends with Summer flopping onto her bed and playing a video game, which is clearly the only game she has time for.

“Playing Games” comes from Summer Walker’s hit debut album, Over It, which features her original solo version of the track as well as the Bryson Tiller-featuring version. The 18-track project includes songs with Usher, 6LACK, Jhené Aiko and others and comes just in time for cuffing and cutting them off season.