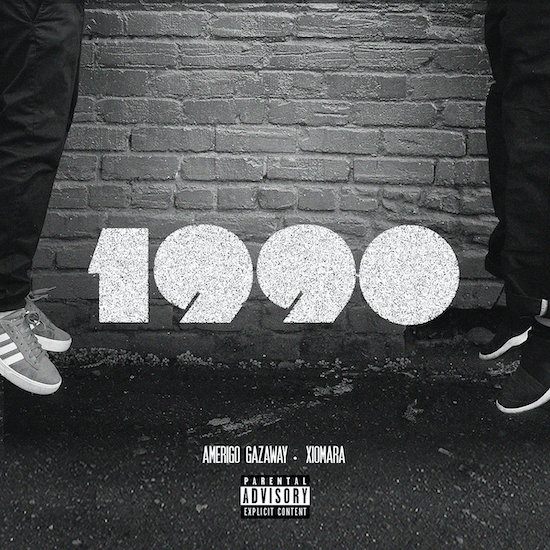 Music fans often find ourselves looking towards the past for inspiration and producer Amerigo Gazaway is no different. In fact, he has built his name off his ability to seamlessly bring together music's past and future on his legendary mashups like Fela Soul; A Common Wonder; Yasiin Gaye;  Young, Gifted & Black and, most recently, "Sittin' Up In My Room."  However, Gazaway is ready to remind listeners that he is just as adept at crafting a beat as he is at blending one and does just that with his latest release, 1990.

Teaming up vocalist Xiomara, Gazaway pays homage to one of music's most classic eras by penning what he describes as "a nostalgic love letter." It is a love letter indeed as the duo manages to conjure up all of the good vibes of the '90s without coming across as cheap imitators. Xiomara's voice sounds eerily similar to Bad Boy Records' era Faith Evans on songs like "Missed Call"  while calling up the swag of Bobby Brown during his "My Prerogative" days on "Westside Swing."

On "No Pressure," it is the boom-bap of SWV's 1992 hit "Right Here" that provides the inspiration for Gazaway's composition. While the entire album is a fun jaunt down memory lane, Gazaway and Xiomara really delve deep into their '90s bag on "Bounce," paying homage to "the f**kboys" over a track that borrows from both A Tribe Called Quest and Missy Elliott. For her part, the Bay Area singer rides each track with ease, her voice containing the same soulful edginess that punctuated that time period.

As with all of his projects, Gazaway continues to show and prove that his love for music runs deep. After spending the past year working together on this collaboration, we can only hope that it eventually gives way to another collabo from Xiomara and Gazaway in the near future.