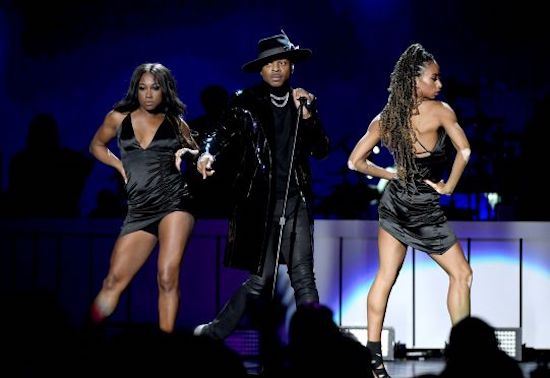 Super producers Jimmy Jam and Terry Lewis were the men of the night at this year's Soul Train Awards — and with good reason. The duo has a slew of hits that can't just be fit into one small tribute performance. Perhaps that's why they got an additional segment featuring Boyz II Men and Stokley performing hits that Jam and Lewis had their hands in creating.

Boyz II Men kicked things off with a cover of The Force MD's song "Tender Love." BIIM's Nate Morris took lead as he recreated the song, though we must admit things were a little shaky note-wise. The pitchy-ness continued as they segued into their chart-topping '90s smash "On Bended Knee," with Shawn Stockman taking over the lead vocals. Things got better, though, when Wanya Morris pulled up the rear to put the song to bed.

There were no such problems for Stokley, though. He commanded the stage the moment he stepped on it. He gave the crowd want they wanted by first performing "SHE...," his current single. Once he whipped them up to a frenzied state he delivered the killer blow of nostalgia with his group Mint Condition's undeniable classic "Breakin' My Heart (Pretty Brown Eyes)." From the familiar horn blasts to the familiarity of his warm tenor gracing the song's notes, it was a joy to hear and watch.

A larger tribute would come later in the show, but Boyz II Men and Stokley definitely set the tone and showed why Jam and Lewis truly are the soundtrack to our lives.