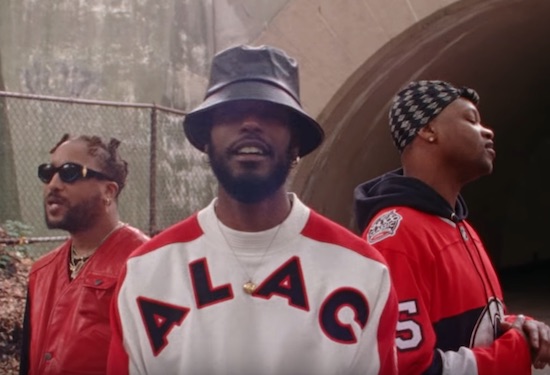 Fresh from their performance of "go girl" on the 2019 Soul Train Awards, Luke James, BJ The Chicago Kid and Ro James reconvened for the song's official music video and they keep the '90s vibes flowing. However, instead of delivering a Martin-themed clip since the hit sitcom is referenced in the song and borrows its title from Martin Lawrence's famous phrase "You go girl," Luke and company go for another aesthetic from the decade. The trio takes it outside to Riverside Park in Harlem to hang with their homies and some honeys, making this look more like a '90s-era hip-hop video.

Director Ray “Neutron” Spears captures both the swagger of the singers and their posse and the natural beauty of the featured women who look more like the girls next door than video vixens. Dressed in coordinating red, black and white outfits, Luke, BJ and Ro trade time on the mic to sing their verses at various locations around the famous NYC park. They end their day at a bodega before driving off into the night in a white SUV. According to Luke, the video is, "inspired by '90s love–black love to be specific," and we feel the love in this nostalgia-inducing visual.

"go girl" is the lead single from Luke James' forthcoming album to feel love/d, which will be released in January 2020.


TAGS:  audio, bj the chicago kid, luke james, Ray “Neutron” Spears, Ro James
Previous: Kelly Rowland Gets In The Holiday Spirit With ‘Love You More At Christmas Time’ Next: TJ Jackson Tries To Let Get Of Bad Love On ‘I Don’t Deserve This’