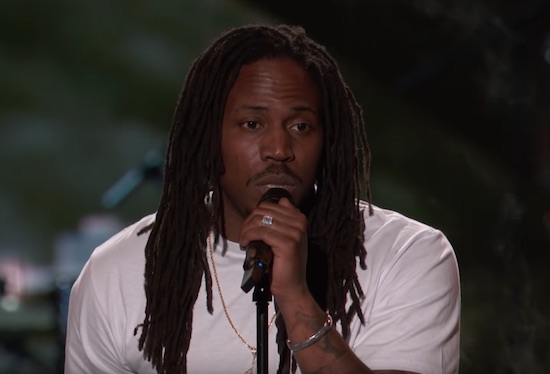 As always, the Soul Train Awards were a celebration of R&B with a who's who of stars and utter hilarity courtesy of co-hosts Tisha Campbell and Tichina Arnold. And, of course, it had tons of performances. Kicking off the night was Cali's own SiR, who dropped his second TDE album Chasing Summer to critical acclaim earlier this year. He blessed the crowd with a medley of two selections from that set, "Hair Down" and "John Redcorn."

For "Hair Down," SiR took the stage with a crew of dancers dressed as flight attendants — which complemented the travel-themed packaging of Chasing Summer. The bop went over well with the crowd, with audience members and fellow luminaries all getting into his groove. The audience was then blessed with an appearance from D'Smoke, the winner of Netflix's rap competition series Rhythm + Flow and SiR's older brother, who dropped a quick spoken word verse before assisting his younger bro on the piano for "John Redcorn." The ballad tugged on heartstrings as the singer lamented falling in love with the right woman at the wrong time (fun fact: it's named after a King Of The Hill character in a similar situation). D'Smoke also offered backing vocal duties during the track, adding a nice counterpoint to SiR's vocal and showing just how musical their family is.

You might think that the mellow vibe of both tracks wouldn't be the best way to start the night's performances. But in a night full of energy, SiR managed to provide just the right amount of chill to an otherwise high-octane show.