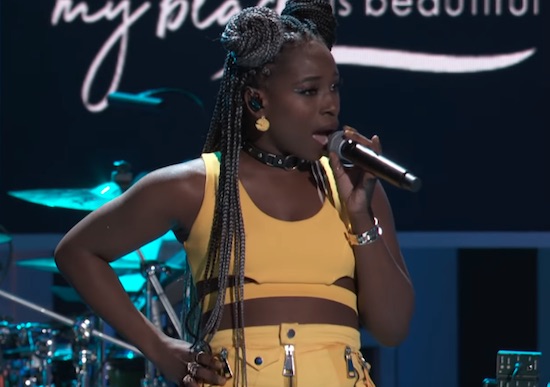 The Soul Train Awards aren't just an annual celebration of established acts and legendary artists, the program makes sure to provide up-and-coming singers with a platform to showcase their talents as well. This year, the 2019 Soul Train Awards gave two artists a chance to stomp with the big dogs: TeaMarrr and Pink Sweat$.

Performing on the BET Music side stage sponsored by My Black Is Beautiful, TeaMarrr was up first. Introduced by Issa Rae, the singer is the first artist signed to Issa's new record label, Raedio. TeaMarrr caught Issa's attention thanks to her quirky single "One Job," which became somewhat of a breakout hit last year. Fast forward to now, and she has a new single, "Kinda Love," and she performed a snippet of it for the Soul Train Awards audience before the show cut to a commercial break. The brief taste we got of "Kinda Love" had an interesting flavor and intrigued us enough to hear more. With Issa Rae behind her and her debut album coming in 2020, more is definitely on the way.

Later in the program, the second act to get some shine on the BET Music stage was Pink Sweat$. Following an introduction by Ari Lennox, who reflected on her own time as a featured new artist on last year's Soul Train Awards, the pink-clad crooner delighted with a performance of his own 2018 breakout hit "Honesty." Pink Sweat$ impressed with his heartfelt yearning and showed that he has the range when he tapped into his falsetto to end his all-too-brief time on the mic. Despite the brevity of his performance, Pink Sweat$ made quite an impression.