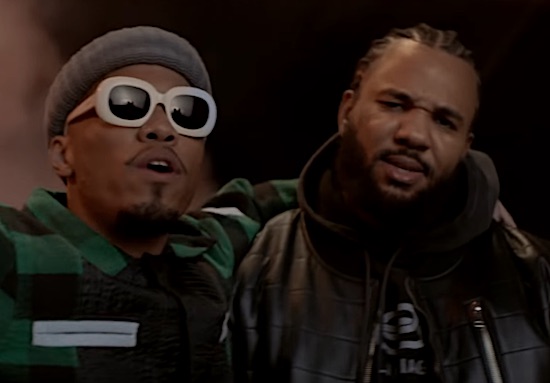 The Game and Anderson .Paak have teamed up to deliver a tribute to West Coast hip-hop legends with “Stainless.” Together, the Compton and Oxnard natives have created a track that captures the feel of yesterday and the energy of today.

Over a G-funk-esque sound bed courtesy of Big Duke and an inspired sample of Kool & The Gang’s “Winter Sadness," the duo pontificates on life, hustling and thoughts on pioneers of West Coast rap. Anderson kicks things off with the chorus and a few soulful couplets before Game shares his verse. “I went from wantin' to be Suge, to hatin' Suge, to fu**in' with him / 28 years' a long ass time, it's fu**in' with him,” he spits. The Game also name drops other left coast figures like Snoop Dogg, 2Pac, Nipsey Hussle and others.

For the video, Game keeps is simple yet nostalgic. Directed by Aaron Green, the clip follows The Game and .Paak as they spend the night racing Lambos and engaging in other hijinks at 2 am in LA. There’s also an homage to fallen legend Nipsey Hussle whose face is painted on one of the Porches featured in the clip. In other scenes, Game also recreates the cover to his 2005 debut album, The Documentary, on a pure soundstage while Anderson joins him for a little cutting up.

Hit play to watch these Cali natives hit switches in "Stainless," which will be featured on The Game’s upcoming album, Born 2 Rap, due November 29th.