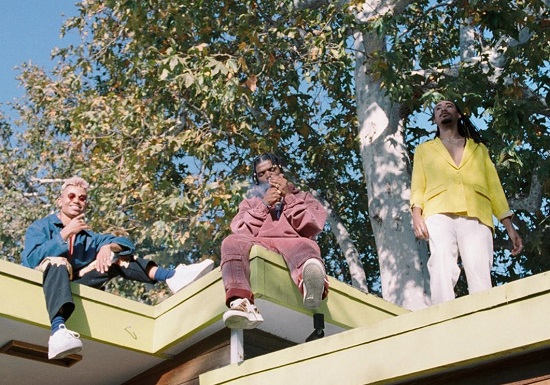 Leven Kali made a splash this year with his Low Tide EP, which featured tracks "Do U Wrong" and "Mad At U." He hopes to repeat the feat with his upcoming High Tide, which will be released sometime next spring. But first he has to start laying the ground work to rope in listeners. To that effect, he's teamed up with fellow artists Smino and Topaz Jones for the set's first single "Homegirl."

"Homegirl" seems to want to clear up any misconceptions outsiders might have when it comes to their platonic relationships. "That ain't my b***h, that's my mothaf**kin' homegirl," they sing on the chorus. The chorus might be cut and dry (and a little harsh), but the verses tell a slightly different story. Each fella takes turns describing a situation in which they and their "homegirl" are, at the very least, friends with regularly used benefits. In fact, neither fella would mind if what they were doing went even further. But hey, who are we to analyze the difference between what's being said and what they actually want? We're especially more inclined to mind our business as the song jams thanks to production that incorporates piano chords, heavy bass and harmonies that keep this one firmly in the head nod-worthy category.

Whether you think they're in deep denial or guys just being guys, you won't be able to doubt that Leven Kali, Smino and Topaz Jones have great musical chemistry. Hear for yourself when you give "Homegirl" a spin.


TAGS:  audio, leven kali, Smino, Topaz Jones
Previous: Arin Ray Invites Us To ‘The Get Down’ Next: Esmé Issues A Dreamy Invitation On ‘Come With Me’