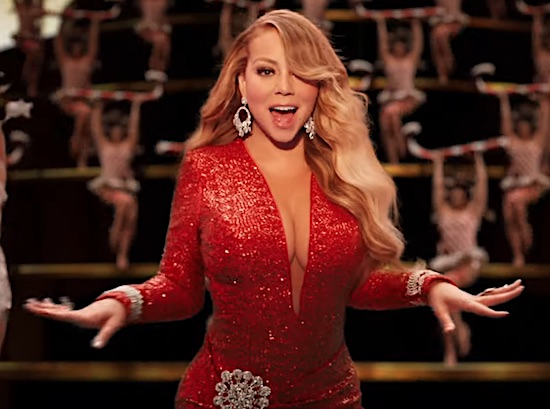 Christmas time is here with lots of joy and cheer. While many are anticipating the gifts under the tree, one songbird already got her Christmas wish: Mariah Carey. The chanteuse (who isn't so elusive these days) finally saw her 25-year-old holiday classic hit the No. 1 spot on the Billboard Hot 100, placing her in the rare air of being the solo artist with the most No. 1 singles to her name. How is Mimi celebrating the feat? By giving us a brand-new video treatment for the holiday staple.

If you'll recall, the song's original video found the then-24-year-old Carey frolicking in the snow in footage made to look like the '60s era the song was channeling. Mariah eschews all that this go around. This time we're transported to a literal winter wonderland through the eyes of a young girl, played by mixed-ish actress Mykal-Michelle Harris. She happens to see a very Mariah-looking mannequin with a golden glow emanating around her in a store's holiday display window. Soon, she's stepping right through that window into a scene straight from a snow globe. There we see MC and a ton of festively dressed dancers (and her twins Monroe and Morrocan) put on a song and dance worthy of Radio City Music Hall. Mariah makes sure that she's at the center of it all with several costume changes, including a red number that gives Jessica Rabbit a run for her money.

While a new video for the timeless tune wasn't a gift we were expecting, we couldn't ask for anything more from the Queen of Christmas. And if it holds down the No. 1 spot through the New Year, Mariah Carey could go down in history as the first artist to have a No. 1 single in four separate decades.