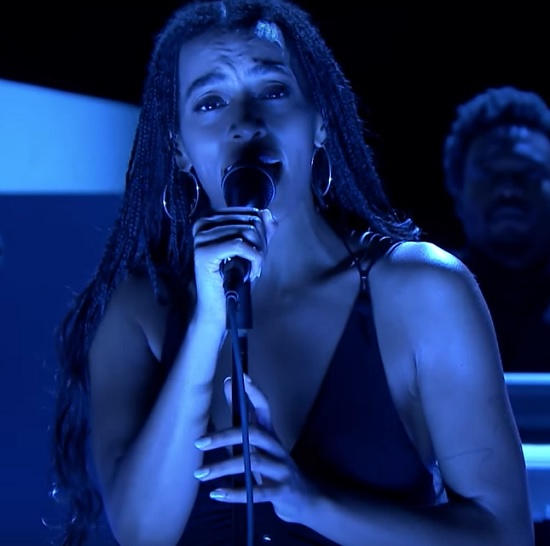 It seems like much longer ago, but Solange actually released her mystifying album When I Get Home earlier this year. The artistic statement was an unexpected turn for the singer-songwriter that further expanded her vision and its accompanying short film took us even deeper into her world. Now Solange is ready to share a special director's cut of the film next week. To mark the occasion, the youngest Knowles sister took the stage on The Tonight Show Starring Jimmy Fallon to offer a nine-minute medley of songs from the album.

Being that this is a Solo performance, we already knew this wasn't going to be your standard late-night fare. She opened the set with a revamped version of album closer "I'm A Witness" while she and her band stood bathed in blue light. Soon, she switched to "Down With The Clique" as dancers behind her took the stage dressed in white leotards, cowboy hats and boots. "Binz" was signaled next with a beat change and Solange twirling the mic above her head like a lasso. A horn fanfare then led into "Almeda" as she shook her braids in celebration of all things black that even featured a chopped-and-screwed ending. The mesmerizing set closed with another revamp of "I'm A Witness" in an ending that left us (and presumably her as well) breathless.

Whether you liked When I Get Home or just couldn't get into it, you can't deny that Solange is Black Girl Magic personified and this performance proves it. In a year overflowing with amazing projects, we're glad Solange took the time to remind us of one of the year's best.


TAGS:  solange, The Tonight Show Starring Jimmy Fallon
Previous: Tuxedo ‘Get The Money’ With CeeLo Green & Do Their ‘Own Thang’ With Tony! Toni! Toné! Next: SiR Sets An Action-Packed ‘Mood’ With Zacari