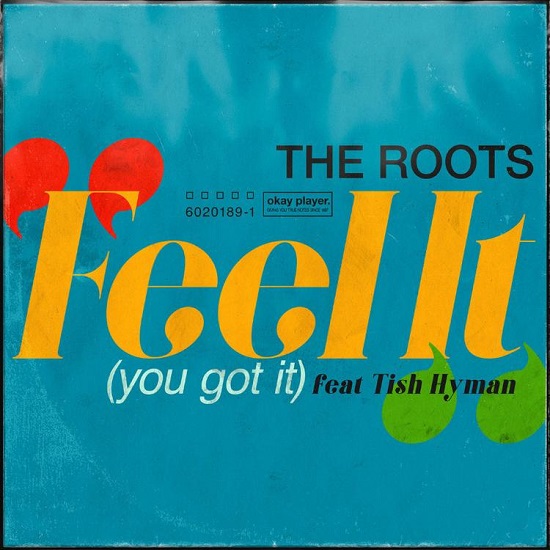 The Roots can be seen on a television screen on the daily thanks to a cushy gig as the house band on The Tonight Show Starring Jimmy Fallon. However, we haven't had any new music from the band since 2014's dark concept album ...and then you shoot your cousin (exemplified by that set's lead single "When The People Cheer"). What gives? Well, the crew has apparently felt their absence as well and are remedying it with the release of their new joint "Feel It (You Got It)."

"Feel It" returns the band back to form. They weave an uplifting and soulful musical arrangement around a hard-hitting boom-bap beat that both sounds and feels good. It sets the stage for battle-tested MC Black Thought to rip rhymes as per usual. He squeezes off a few boastful rhymes about his skills and how they brought him to his current level of come-up. He also offers some advice to those wanting to advance, preaching the value of a hard work ethic and perseverance. The chorus of the track keeps it simple, with the fellas and featured vocalist Tish Hyman singing about going hard and reminding that "you've got to feel it" if you want to make things happen.

According to word on the street, "Feel It (You Got It)" might be the first listen of the group's upcoming project, tentatively titled End Game. Take a listen to the latest from The Roots and let us know if you, too, are feeling it.


TAGS:  audio, black thought", the roots, Tish Hyman
Previous: Summer Walker Wasn’t ‘Playing Games’ On ‘The Tonight Show’ Next: Mabel Tries To Shake Off the Winter Blues For The ‘Loneliest Time Of Year’