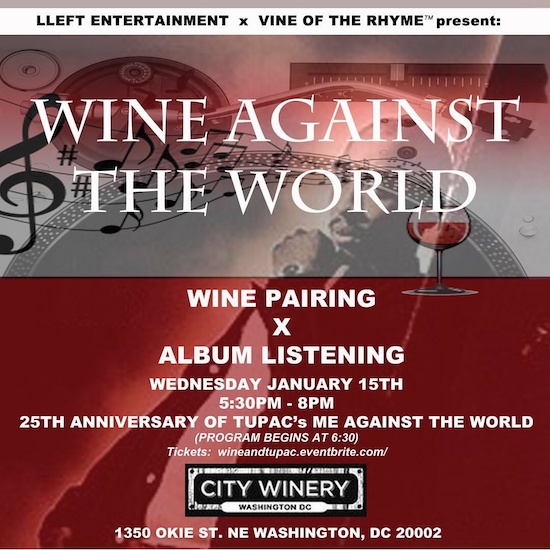 In 1995, Coolio's "Gangsta's Paradise" may have been the biggest-selling single of the year, but he wasn't the only West Coast rapper making waves. We need not look any further than the gifted artist and controversial figure better known as 2Pac, who released his third studio album, Me Against The World, that year. The album gave us the classic single "Dear Mama," garnered positive reviews and was considered one of the best rap albums of the '90s. Fast forward to 2020, and Me Against The World turns 25 this year. Fans around the world will be commemorating this anniversary in various ways throughout the year, but 2Pac fans in the DMV can do it over wine and conversation this week at Wine Against The World.

Brought to you by Vine of the Rhyme and LLeft Entertainment, Wine Against The World will be another of their signature wine pairing and music listening events in Washington, D.C. Partners in wine Dr. DeepCrates, DJ Pheelin' It and Tracey Lee kicked the series off last year and have created quite a fun, informative and entertaining night out for DMV wine and music lovers. Those who've been before keep coming back, and if you've never been, just know that you're always welcome. DMV Bouncers will want to add Wine Against The World to their calendars for this Wednesday, January 15th starting at 5:30 pm in the Wine Garden at City Winery Washington DC.

Everyone who comes out to Wine Against The World on Wednesday will also get to enjoy a special Shop @ SoulBounce pop-up shop. SoulBounce is happy to be a part of the Vine of the Rhyme "love village," and you'll see our faces in the place with lots of merch to sell.

Tickets to attend Wine Against The World are on sale now on Eventbrite and a few tickets will be available at the door. Come through to raise a glass to toast Me Against The World's 25th anniversary and to pour some liquor out for 2Pac.