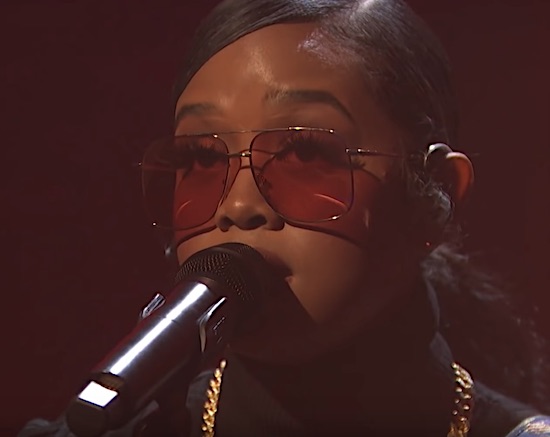 Night owls and insomniacs were in for a treat when H.E.R. was the musical guest on Late Night With Seth Meyers on Monday. The GRAMMY winner and current GRAMMY nominee came through to entertain the in-studio and at-home-in-bed audience with a performance of her current single "Slide" for Seth Meyers' first show of 2020.

After a brief introduction from Meyers, the camera panned to H.E.R. center stage with her guitar and her band behind her. With featured artist YG absent, her drummer and bass player took the opportunity to fill in for the rapper with an instrumental intro. That wasn't the only change, as H.E.R. decided to switch up the song's arrangement a bit. The refixed groove didn't sound bad per se, but there were a few odd notes, making the performance sound like an on-the-fly jam session or like they needed more rehearsal. Artistic choices aside, H.E.R. sounded great as usual and made it worth staying up late to see her.