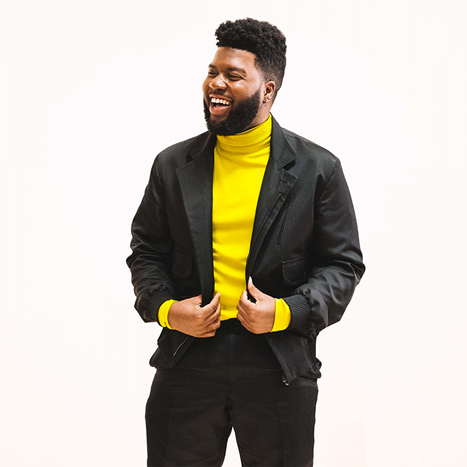 Khalid had a huge 2019, topping the charts and keeping his name in everyone’s mouth with his hit single “Talk,” which is currently nominated for a GRAMMY Award. Not quite ready to pump the breaks on his momentum, the singer has released his first single of 2020, “Eleven,” a smooth R&B track made for late-night drives.

The artist told Zane Lowe on Apple Music Beats 1, “I love making music you can drive to, and I feel like ‘Eleven' is the perfect track to just play on your stereo, grip the wheel of your car, and just go where the wind takes you.” The track also takes some inspiration from his mother’s love of late-‘90s R&B. “My mom lives, breathes, sleeps R&B music, so I really feel like this is an ode to just people who came before me… It reminds me of that Timbaland era and Aaliyah and music just felt so good.”

Against a thumping guitar lick, Khalid cruises the streets while also making eyes with the woman sitting in his passenger seat. “Twenty-one, sittin' on my M5 (yeah) / Ride around summer, all-wheel-drive, yeah / Couple blunts in and I got my windows down / Lookin' real nice in my passenger side,” he croons, setting the mood for a relaxing and romantic drive down lover’s lane. For the most part, the track is what we’ve come to expect from Khalid, with hearty vocals, some heavy breathing harmonies and an arresting backing track. The breakdown at the 2:50 mark is where the late-'90s inspiration truly shines, with a crescendo that’s begging to break out into a different song or at least a remix. As an added bonus, the track also features a couple of secret ad-libs from our boy Craig David. Listen closely and you can hear his unique falsetto. And, if you’re interested in learning the lyrics to the track, Khalid has shared a lyric video. Just follow along to the bouncing M5 in the black-and-white clip to learn the words.

“Eleven” is the second single from Khalid’s next project, following “Up All Night,” which dropped in November. Khalid is currently in the studio working on new music, so expect even more joints and jams like these to come.