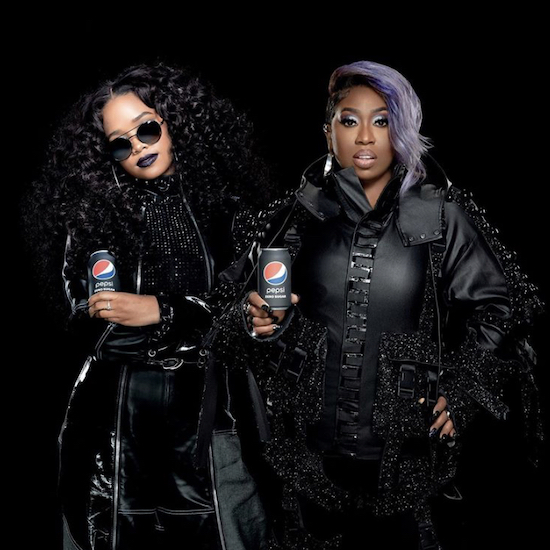 Years ago, one had to wait until Super Bowl Sunday to get a look at the day's big ads. Nowadays, we have to wait no more as many larger brands opt to release their flashy ads ahead of game day. Pepsi is the latest brand to hop on the early bandwagon, releasing its latest commercial featuring Missy Elliott and H.E.R. several days ahead of the big day and the result is sweet music to our ears.

For the spot, Missy and H.E.R. take on The Rolling Stones' classic "Paint It Black" as Pepsi literally changes their competition's "cola" cans from red to black. In true Missy fashion, even a 30-second ad is an opportunity to step outside the box and she brings H.E.R. along with her. Viewers see the young singer break down the wall as she fades to black after taking a sip of Pepsi Zero Sugar.

The short-but-sweet clip sounds as if it has all the makings of a certified bop if it were longer thanks in part to the Timbaland-produced track. Instead, we get to feast our ears on what we can only hope will give way to a longer, fully-realized collabo between these two musical forces.

Missy said it was a no-brainer when the opportunity presented itself to hit the studio with H.E.R, who echoed the sentiment in a recent interview. "Everything about this experience -- from the music, to the shoot, to the collaboration with an icon like Missy -- it was really special,” she said.  "Pepsi gave us the creative liberty and platform to create this song and the video, it’s an honor and I think people will appreciate how real we tried to be with the final product."