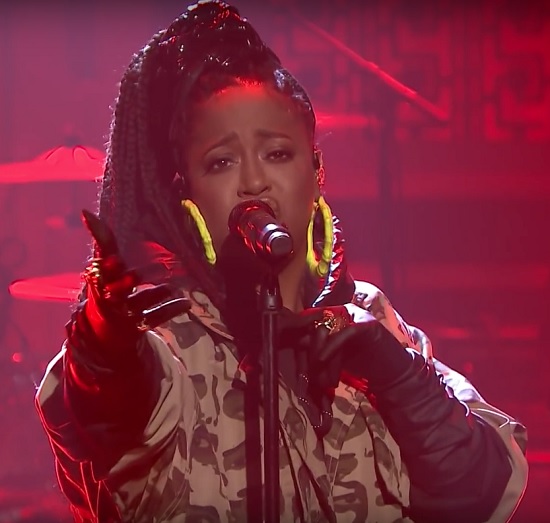 Rapsody made quite the splash last year with her album EVE. The project paid tribute to black women not only in the name of each track but also in subject matter. Many songs from the album have gotten spin, but her current single "Afeni" seems to be resonating most, so it's no wonder that it's the one she took to The Tonight Show Starring Jimmy Fallon stage during her recent performance.

Rapsody — who stepped out on stage with elegant braids piled atop her head, an oversized coat and black gloves dripping with gold rings — tapped the song's collaborator PJ Morton to share the spotlight as she brought the track to a national audience. She took the first part through its usual paces while dedicating it to Afeni Shakur's memory. However, after PJ offered the chorus, she flipped the script and incorporated two of 2Pac's hits — "Keep Ya Head Up" and "Dear Mama" — while shouting out Pac, Nipsey Hussle and Kobe Bryant. It was a pretty good showing for the late-night program that showed what a live set from the rapper would look and sound like.

Speaking of which, Rapsody will soon be hitting the road on her A Black Woman Created This. Tour. The trek is set to kick off in Philly on February 4th and wind its way through North America before wrapping in her home state of North Carolina on March 13th. For a full list of dates and ticket information, you can head to Rapsody's website. But first, check out Rapsody and PJ Morton putting it down for the sistas and brothas on The Tonight Show right here.