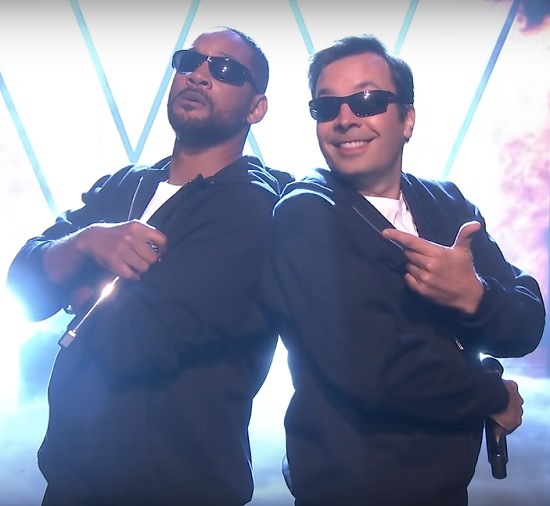 When you have a career that has spanned four decades, sometimes you have to remind folks exactly why you're the s--t. That's exactly what superstar Will Smith did when he showed up on the couch while appearing on The Tonight Show Starring Jimmy Fallon. But, Will being Will, he didn't just simply say his accomplishments. He took the stage with host Jimmy Fallon to offer the late-night audience a sampling of what he's been up to for the past 35 years.

He started with his musical beginnings in 1985, when a then 17-year-old Fresh Prince took the rap world by storm with his partner-in-rhyme DJ Jazzy Jeff. From there, Will and Jimmy moved on to his next claim to the fame: The Fresh Prince Of Bel-Air. Of course they didn't stop there, also shouting out many of his film roles — from Six Degrees Of Separation to Independence Day and the many Men In Black sequels — and his leading role as a husband and father of three. The duo even got to his dominance of social media by pointing out his many YouTube stunts and shows.

Will Smith has led a storied career and with Bad Boys For Life set to arrive in theaters on January 17th, it looks like that story will keep on keepin' on for the foreseeable future.

Talk a walk down memory lane with Big Willie and Jimmy while they rap the history of Will Smith when you press play.


TAGS:  jimmy fallon", The Tonight Show Starring Jimmy Fallon, will smith
Previous: Alicia Keys Stands Up For The ‘Underdog’ Next: José James Makes It Do ‘What It Do’ On New Single