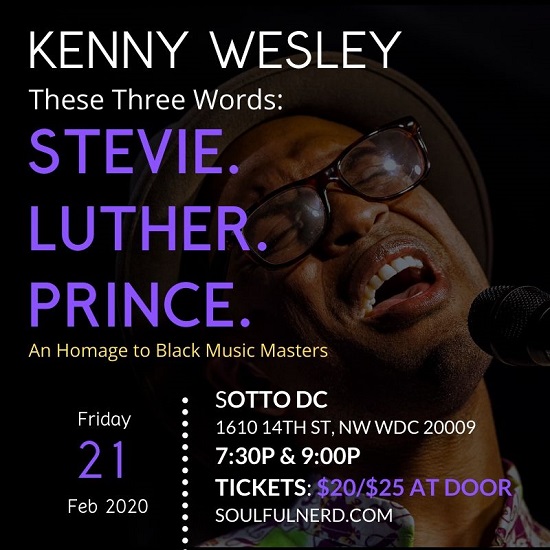 Our good friend Kenny Wesley has traveled the world and taken us along for the musical ride, introducing us to many artists along the way. Now that he's landed back in the DMV, he's been digging in the crates of the greats and will be performing some selections from three of them during a special evening at Sotto in Washington, D.C. on Friday, February 21st. Entitled "These Three Words: Stevie. Luther. Prince," Kenny will be paying homage to Black Music Masters Stevie Wonder, Luther Vandross and Prince. If anyone can do a proper vocal tribute to these legendary superstars with his own style and flair, Kenny Wesley can and he'll be doing so at two shows – an early 7:30 p.m. show and a late 9 p.m. concert. Whichever concert you decide to check out, you are in for a treat from the moment Kenny opens his mouth to let his soul glow.

To make sure that you don't miss Kenny Wesley's "These Three Words: Stevie. Luther. Prince." live at Sotto, you'll need tickets to the shows, which are available for sale now via Eventbrite. Kenny has also been kind enough to give us a pair of tickets to each show, which we're giving away to two DMV Bouncers. To get this live music blessing in your life, you'll need to enter to win tickets on the next page.