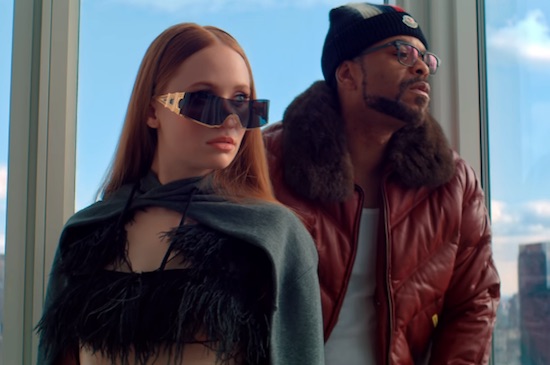 iyla came on the scene with her lush, engaging visuals, making a name for herself as a blue-eyed soul artist to watch with her debut EP, 2018’s War + Raindrops and single “Juice.” The Los Angeles-based songstress has now dropped her new EP, OTHER WAYS TO VENT, and shares the second single from the project, “Cash Rules” featuring Method Man, a play on the Wu-Tang Clan classic ‘C.R.E.A.M.”

Over a slinky, funky, mid-tempo vibe of horns and boom-bap drums, iyla asks her lover some questions about his personal philosophy. “You say cash rules everything around you, what about love?" she wonders aloud, trying to see if all his bravado and machismo leave room for a mature relationship. Method Man proves that his lyricism only gets better with age while he calls his girl out for complaining about his money-hungry ways while benefitting with shopping sprees, he admits at the end, “No, you don't care about the things that I got /You only care about me giving everything that I got.”

The video for “Cash Rules” continues iyla’s streak for creative visuals. We see the singer and her bad-boy lover living lavish in humble surroundings. While the couple is draped in designer duds, diamonds and gold, with opulence to spare, their actual home looks condemned. The analogy of a relationship built on material things and not to last is executed flawlessly by director Patrick "Embryo" Tapu. iyla knows how to work a camera and keeps all eyes on her in her scenes. Later when Method Man joins the video, he has our undivided attention as he delivers his verse from a high rise overlooking the city.

"Cash Rules" joins OTHER WAYS TO VENT lead single "Tattoo Tears" and are two standouts on the enjoyable seven-track EP. In addition to dropping her new project, iyla is also headlining her first-ever North American tour starting Sunday, February 16th. On her short but sweet trip around the states, she’ll tip through San Francisco, Dallas, Atlanta, D.C., Philadelphia and a few other stops before closing things out in Salt Lake City, Utah. You can see when she’s coming to a venue near you by visiting her website.