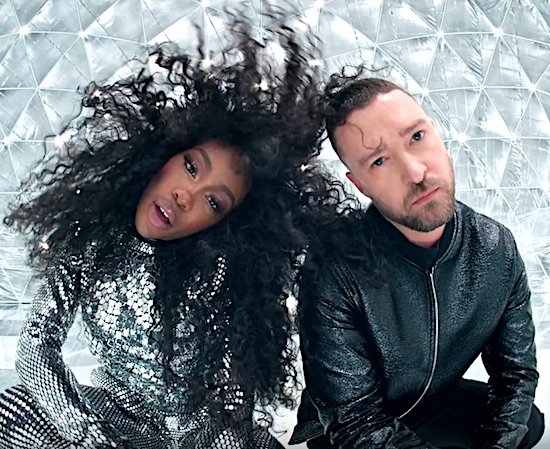 Justin Timberlake has hooked up with SZA to give us a feel-good track that will get children of all ages bopping for the Trolls World Tour soundtrack. On the previous Trolls soundtrack, Timberlake gave us his GRAMMY-winning hit "Can’t Stop the Feeling!" and a cover of Earth, Wind & Fire's "September" that nobody asked for. Thankfully, "The Other Side" is more like the former than the latter.

As you might have guessed, "The Other Side" is the old adage "the grass ain’t always greener on the other side" put to a funky beat. Produced by Timbaland and Ludwig Göransson, who has the score for Black Panther under his belt, the track is very similar to Justin’s 2003 hit "Rock Your Body," with a touch of the disco vibe that Timberlake has added to his sound as of late. The song opens with SZA sharing a little wit and wisdom, singing, "You’re preaching to the choir / Stop hating on yourself." Meanwhile, Timberlake just wants you to "stop stressing about what you’re missing" and practice some self-love.

The video also has some of that same throwback flavor. Visually similar to the clip for "Rock Your Body" as well, it's also mixed with a little bit of Michael Jackson’s "Scream" and other ‘90s clips. SZA is decked out in an abundance of sexy silver catsuits, Justin does a few two-steps in a leather jacket and Hype Williams-style fish-eyed lens scenes and some funky backgrounds are everywhere. The look and feel matches the upbeat vibe of the song and will put you in a good mood.

"The Other Side" is the first single from the Trolls World Tour soundtrack. Timberlake is one of the featured voices in the film and is executive producing the project, which will also feature songs from Icona Pop, Ozzy Osbourne, Kelly Clarkson, Göransson and an "Atomic Dog" World Tour remix with George Clinton and Parliament Funkadelic, Mary J. Blige and Anderson .Paak.

Hit play below to take a journey to "The Other Side" with Justin Timberlake and SZA.