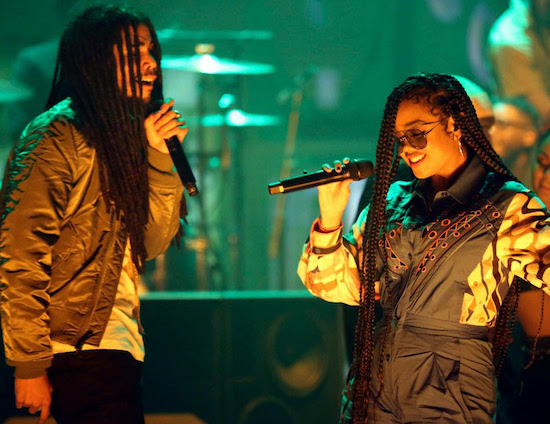 Skip Marley and H.E.R. brought the bashment vibes to The Tonight Show Starring Jimmy Fallon this week with a steamy performance of their duet, "Slow Down."

For the debut performance, the duo transformed the stage in Studio 6-B into a late-night party complete with couples grinding and whinin' up on each other as The Roots provided the backing music. Red and green lights alternated on the dimly lit set, further setting the tone for the sexy number. The chemistry that radiated between Marley and H.E.R. in their music video was still palpable live on stage, likely doing little to quell speculation that the two have more than a working relationship going on.

For this to have been the first time that the two performed the song on television, their voices blended as if they've been singing together much longer, leaving us hoping there's more in store where "Slow Down" came from. Peep the sparks that fly between Skip Marley and H.E.R. with this hot performance.