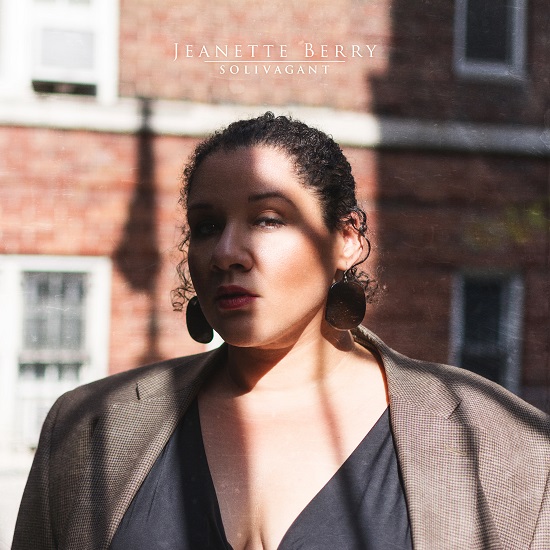 When we think of Valentine's Day, we think of expressions of love, joy and romance. For many, however, that simply isn't the case. The holiday is often a time of sadness for some for myriad reasons. And though everyone else seems to be blissful on that day, those feeling sad on the most romantic day of the year should know that they are not alone. That's why singer-songwriter Jeanette Berry is releasing her EP Solivagant this Valentine's Day. Before its official release, Jeanette is allowing SoulBounce to give you an exclusive first listen to the set.

The EP's title means "marked by solitary wandering." Once you take a listen to the set, you'll see why the name was chosen. Each track is marked by a sense of solitude and melancholy that is recognizable by anyone who has ever felt the sting of love lost. It starts with the heart-wrenching "Hard To Love." The track opens with a painfully honest question: "What is it about me that makes me hard to love?" It's a startling question, but one that opens up the song to an interesting track of introspection about love and relationships set to a sparse arrangement of piano and light touches of strings and flute.

"By Your Side" also starts with sobering realization as Jeanette names the things she'll never be to her former lover. She sings over another sparse arrangement, this time opting for an acoustic guitar, allowing her dynamic voice to cut through as she details what led to their love's demise. She goes for something jazzier on closer "With You," which opens with woozy saxophone and drum flourishes before settling into a smoky groove that underscores her longing for her former lover's touch. She even incorporates a bit of spoken word from an unnamed, baritone-voiced collaborator who adds extra smolder to the song's flame.

"This work is being shared on Valentine's Day because too often women, and especially Black women, aren't able to simply be sad," the artist said in a statement. "I allowed myself to be that, and I wanted to create music that could be a soundtrack of sorts to that sadness, and hopefully beautiful enough to listen to no matter what mood you're in."

We think she succeeded in her goal. You can judge for yourself by listening to our exclusive stream of the Solivagant below. To get more of Jeanette Berry, make sure to head to her website, follow her on Instagram and check out her thoughts on Medium.


TAGS:  audio, Jeanette Berry
Previous: Ben Williams Celebrates Our Black Brothers On ‘I Am A Man’ Next: Skip Marley & H.E.R. Brought The Party & Their Duet ‘Slow Down’ To ‘The Tonight Show’