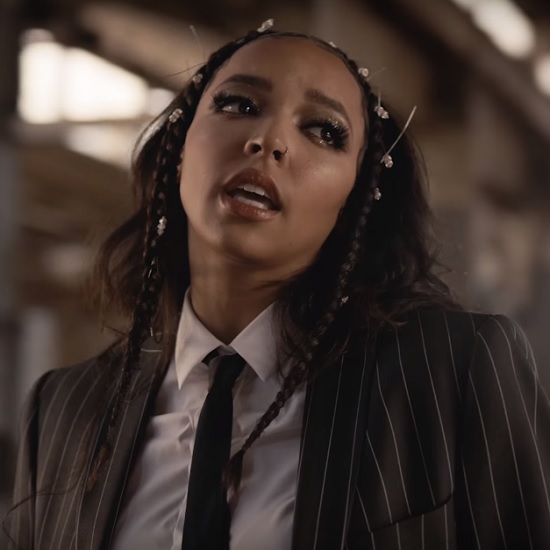 Tinashe released a pack of jams when she dropped last year's Songs For You. We have our own favorites — "Hopscotch," "Stormy Weather" and "Die A Little Bit" among them — but we have to admit that our fave has to be the lonesome jam "Save Room For Us." It's one of Tinashe's favorites as well, apparently. In fact, it's so nice that she's gave use one video for already and now she's back with another take visual take.

In the first rendition of the clip, Tinashe took us on a journey to Tokyo. This time around, she appears alone in a warehouse to give us vibes similar to Janet Jackson's "Pleasure Principle" vibes. She offers acapella vocals for the MAKJ co-produced song at first but she's not solo for long. As soon as the beat drops, a troupe of similarly dressed fellas join her in some slick choreography as she sings her heartache out. We already knew that Nashe was a master of fancy footwork and she impresses once again with choreography that reminds of us of epic videos from the '90s and early 2000s.

We're enjoying everything that the entertainer is giving us this go 'round, especially the visuals. Hopefully she'll keep them coming as she continues to promote her latest effort. We've hope you've saved room for Tinashe, as she's got a lot to give you in her new visual.


TAGS:  janet jackson, MAKJ, Tinashe
Previous: Janet Jackson & The Roots Give A ‘Runaway’ Performance On ‘The Tonight Show’ Next: The Hamiltones Return With ‘The B Side’ & New Video For ‘Gotta Be Loving Me’