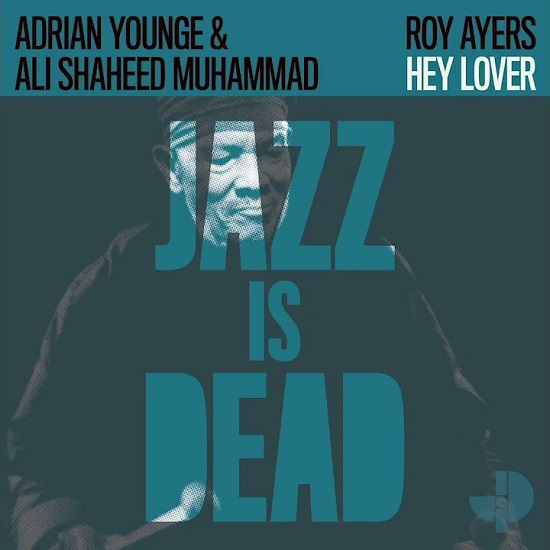 The world seems to always be focused on the new, often completely ignoring the past that makes what's new is possible. You know who's not doing that, though? Adrian Younge and Ali Shaheed Muhammad. The fellas, who together form the group The Midnight Hour, aren't afraid to show their work and cite the giants who came before them and continue to inspire their own art. Actually, they're taking it even further by creating their own label — Jazz Is Dead — and disproving their moniker by working with masters of the craft for the label's first-ever compilation album Jazz Is Dead 001. The first single from the collection, "Hey Lover," is out now and features the legendary Roy Ayers.

"Hey Lover" is a smoky, jazzy smash from the moment you press play. An upright bass lays down the foundation and is soon joined by keys, strings and other instruments as a distinctive mood is built. It evokes the feel of the jazz clubs of yesteryear, which is further built upon when whisper-soft and seductive vocals begin as they beckon a lover to come nearer. The sweet nothings they sing are indeed enticing, especially with the hypnotic trance of the heady groove that draws you in and keeps you in its embrace until the song's all-too-short run time is complete.

Jazz Is Dead 001 is set to feature a few heavy-hitters — including Ayers, Gary Bartz, Brian Jackson, Doug Carn, Marcos Valle, Azymuth and João Donato — when it's released on March 20th (which, if you've checked your calendars, is this coming Friday). You can pre-order the set either from the official Jazz Is Dead website or via Bandcamp. But first, get into the vibe of "Hey Lover" and the chemistry between Adrian Younge, Ali Shaheed Muhammad and Roy Ayers when you press play.