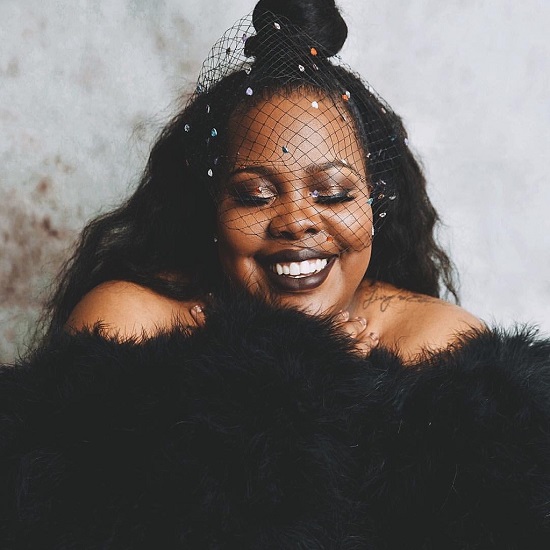 We've been singing the praises of Amber Riley since we were introduced to the powerhouse vocalist on the musical series Glee. Since the end of that venture, Amber's star has only been getting brighter. The multi-talent has dropped a handful of singles and even appeared on London's famed West End as the star of a Dreamgirls revival. Now it seems that she's ready to give us what we dreamed of with a much-teased solo project in the works. But first she tests the waters with a cover of Lewis Capaldi's ballad "Someone You Loved."

"Someone You Loved" is the kind of power ballad that perfectly suits Amber's voice. She attacks the song with tenderness from the very beginning, restraining her voice just a bit as she allows the song to build ever so slightly. With the song's emotional stakes upping with every verse, Amber's push and pull approach makes her take all the more interesting. Where most would simply belt this one out (including Lewis himself), her measured approach takes us to through the hills and valleys of feeling loved and then feeling the loss when that love is taken away.

The song itself is great, but what's even better is Amber using it to help her fellow man. "Some time back, I decided to cover a song that really touched me. Initially I didn’t know what I wanted to do with it," the singer said about the cover on Instagram. "We’re experiencing SO MUCH together, and I just wanted to find a way to put some good into this world. So I felt this was the perfect time to release this song. A portion of the proceeds will be going to [A Place Called Home], which is an organization that is very near and dear to my heart."

The organization is feeling the love as well, taking to Instagram to give Amber some shine and thank her in the process, writing, "We are so excited that our dear friend Amber Riley just released a cover of "Someone You Loved," out now on all platforms! And we are even more excited that a portion of the proceeds from this release will go toward supporting A Place Called Home!! Amber’s support of APCH throughout the years has been nothing short of incredible, from working with our kids in the recording studio, to being honored at our 2014 GirlPower Awards, to just recently hosting our 2019 Gala for the Children, we truly cannot thank her enough!"

We're sure you'll be feeling the love when you give the track a listen as well. Check out both a stream of the song via Spotify and the official video below. You can also help spread the love by picking up a copy of the track for yourself to help support a good cause.