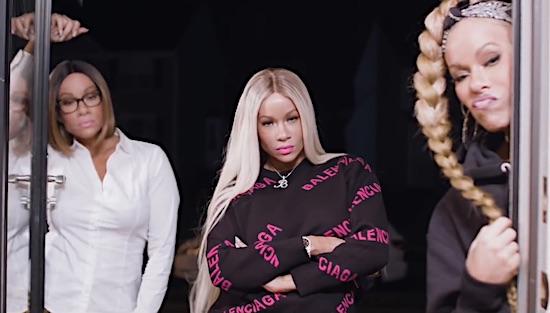 Brave Williams has been in the spotlight recently as the star of indie film, Love Dot Com: The Social Experiment, playing a vegan chef looking for love in Washington, D.C. alongside fellow artists Raheem DeVaughn, Wes Felton and Christopher Williams.  Although she's trending on Netflix right now, that doesn’t mean that she's gone Hollywood. The singer is actually hard at work on creating new music for her debut album. To that end, she's released her latest single “Options,” which is, as the artist described on Instagram, “a song of liberation. It’s A PSA. A reminder to my women and anyone in a relationship – that you ALWAYS have a choice. Self-love should be number 1. But sometimes – that’s the hardest to choose.”

On the mid-tempo R&B head-nodder, Brave is letting the man in her life know that he needs to stay on his P’s and Q’s because she has suitors ready and waiting to take his spot. She breaks it down throughout the song, singing, “Don't you know, how many want to take your spot right now, right now? / Don't you know, how many want what you got right now, right now?" Basically, if want to keep her around, you better make sure you put that woman first.

Brave continues to stretch her acting muscles in the video for “Options.” Directed by Mike Smigiel, it's Valentine’s Day and Brave’s boyfriend is delivering gifts to all his girlfriends – all comically played by Brave. She’s wifey, a teacher and a crazy round the way girl. While her man thinks he’s slick, all the ladies catch him slipping, leading to a very funny conclusion.

“Options” is the latest single to drop from Brave Williams' forthcoming, as-yet-untitled album, following previous single “You.” When you watch Love Dot Com: The Social Experiment, listen closely and you'll hear "Options" on the soundtrack. While we’re anxious to hear more about what the songstress has coming up, it’s good to hear the former RichGirl isn’t short on “Options.”


TAGS:  audio, Brave Williams, mike smigiel, raheem devaughn, richgirl, wes felton
Previous: Lion Babe Is Out Of This World In ‘Different Planet’ Next: India.Arie Takes On A Classic With ‘Georgia On My Mind’