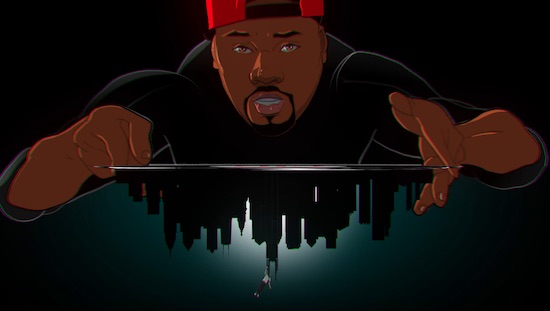 DJ Aktive has lived up to his name by being your favorite artist’s favorite DJ to take on tour. The man behind the turntables understands how to move the crowd from East Coast to West Coast to worldwide and has hyped up crowds for Diddy, Janet Jackson, NaS, Alicia Keys and many more. But while Aktive is hardly home, he’s always repping his hometown of Philadelphia. Aktive assembled a few of his neighbors for a posse cut about their hometown, "The City" featuring Illadelphians Freeway, Bri Steves and DJ Jazzy Jeff with an assist from Chicago's finest Common. We've been rocking "The City " since it dropped last summer, and now DJ Aktive takes us back to the city streets in the music video for the track.

For the visual, each MC takes a journey through their hometown via animation by director Konee Rok. Freeway’s journey is inspired by the history of the city and his own highs and lows, including his kidney transplant and an homage to the legendary film character Rocky. Bri Steves takes a long walk through Philly before taking the train to Chicago. In the Windy City, Common gives us the 10 cent tour of all the city’s landmarks. Aktive shows where the city has taken him with a short scene of him on tour with Janet. Finally, the clip ends with the legendary DJ Jazzy Jeff making the earth move like he makes the turntables groove, representing the influence of the city of Philadelphia on the world.

Take a walk through these animated streets of "The City" with DJ Aktive and his famous friends, and pick up his debut album The Tour if it isn't in your collection yet.