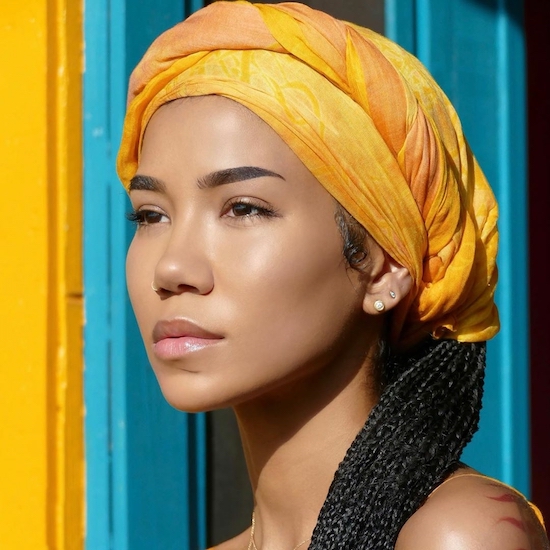 It's been three years since Jhené Aiko released an album, but that officially changed today with her third album, Chilombo. If you’ve been following the singles that have dropped from the project – "Triggered (freestyle)," "None Of Your Concern," "P*$$Y Fairy (OTW)" and "Happiness Over Everything (H.O.E.)"  – then it's been quite evident that our girl has been going through some things. On the rest of Chilombo, she continues singing about pain, revealing her passion and sharing pearls of wisdom. There’s a strong self-care/self-reflective mood to the album, as Jhené reminisces over a failed relationship and life in general. There’s the hood hippie vibe that she’s become known for, but she gets raw, too, with frank lyrics like, “I know life’s a b***h, but she could at least give me some head.”

Features are plentiful on Chilombo, with appearances by H.E.R., Nas, Ab-Soul, her on-again/off-again "ex" Big Sean and Future and Miguel who guest with Aiko on “Happiness Over Everything (H.O.E.).” The latter two joined Jhené today on The Ellen DeGeneres Show to perform the single. Ellen DeGeneres had the day off, but Demi Lovato filled in as host and welcome the trio who clocked in a charming and fun performance.

With Ellen's stage decorated to subtlely reenact the look and feel of the video and serving Hawaiian luau realness, Miguel and Future started the performance off. Jhené soon joined them on stage, doing her signature strut and singing the first verse. Meanwhile, hula girls and partygoers danced in the background, enjoying life as tiki torches flared. The trio closed things out by singing the chorus in perfect harmony as the audience waved their hands in the air.

We're sure there are many more television performances scheduled for Jhené as she is in full album promotion mode right now. If they're as entertaining as this, bring 'em on. While we wait and see where else she will appear on our TV screens, take a deep dive into Chilombo and the many moods of Jhené Aiko.