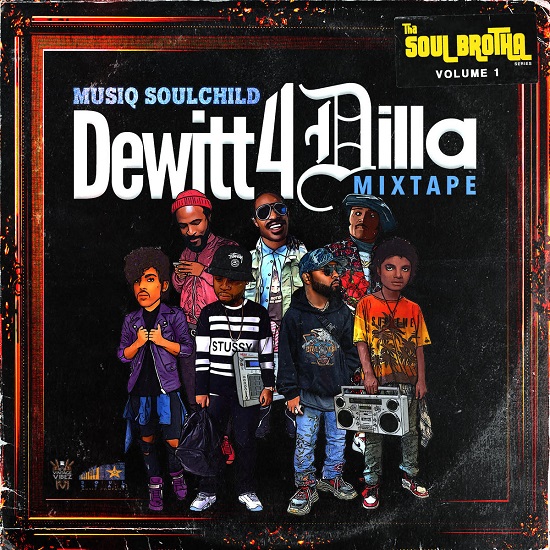 Although it's been a minute since we've heard a solo project from Musiq Soulchild, our boy certainly hasn't been idle. The Philly-bred artist lent his signature vocals to some impressive collaborations over the past year, including Dionne Warwick's return, the debut of Lumi Trice, Smif-N-Wessun's comeback and a soulful pairing with Annalé. But his latest partnership is a personal milestone, featuring someone he's been longing to join forces with since his career first began – the late J Dilla.

Musiq has released Tha Soul Brotha Series, a 5-track collection of covers serving as the first volume of his Dewitt4Dilla mixtape project. The prolific DJ/producer/beatsmaster is the main source of inspiration for the album – even the title is a clever nod, referencing his real name, James Dewitt Yancey.  But the set also pays homage to the five legends who most influenced Soulchild's career. Dilla's trademark beats provide an incredible backdrop for Musiq to reinterpret iconic songs by Donny Hathaway ("Love, Love, Love"), Marvin Gaye ("Sexual Healing"), Prince ("I Wanna Be Your Lover"), Stevie Wonder ("Ribbon in the Sky") and Michael Jackson ("Rock With You").

"For about 20 years Dilla has been my main musical inspiration," the artist explains. "This feels to me, the most on brand hip-hop soul project that I've ever done. I hear myself more than I have on any other project. It literally embodies all of the necessary elements that make up hip-hop soul. I've been doing what I've done on this project, but people haven't really caught on because its all been original stuff. But when I put it in the context of taking a Donnie[sic] Hathaway song and singing it over a Dilla beat, it was like, 'that's it! That's Hip-Hop Soul!'"

We're diggin' everything about this project, including the dope artwork by contemporary visual artist The Producer BDB. Give Tha Soul Brotha Series a preview spin below, then head to the official Dewitt4Dilla Bandcamp site to purchase a copy.