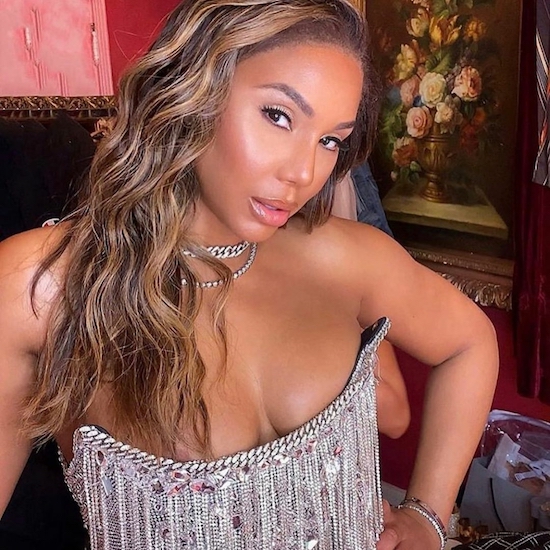 Tamar Braxton's list of singles and IMDB acting credits is growing. The singer and reality TV star has been cast in the feature film True To The Game 2, co-starring Vivica A. Fox, Andra Fuller, Rotimi, Niatia "Lil Mama" Kirkland and Jeremy "Prison Bae" Meeks, and she also has a song on the soundtrack, her latest single "Crazy Kind Of Love." The song serves as her first new music since 2017's Bluebird Of Happiness album, and she's released it with an accompanying music video.

Produced by Hitmaka, "Crazy Kind Of Love" finds Tamar in her ballad bag and channeling her inner Whitney Houston. The song interpolates the melody from Nippy's "Saving All My Love For You" with a completely different set of lyrics and subject matter. Instead of pining over a married man, Tamar sings about the crazy kind of love that she has for her boo. It may not make sense to everybody, but it makes sense to her.

The music video finds Braxton serving various looks with scenes from True To The Game 2 interspersed throughout. We see her singing throughout an ornately decorated house with pink walls, floral wallpaper and Baroque furniture while also in character as "Ariana" a receptionist in the flick. Our girl is not alone in the house, with her real-life manfriend David Adefeso making a guest appearance in nothing but his boxer briefs. Meanwhile, Tamar is dressed to the nines, nails done, hair done, everything did and looking quite fancy.

Tamar Braxton's "Crazy Kind Of Love" is a solid single that gets her back in the R&B game – not that she ever left, but three years is a long time. Pick the song up from your choice of digital retailers and look out for her on the big screen when True To The Game 2 hits theaters later this year. In the meantime, listen to the single, watch the music video and peep the movie's trailer right here.