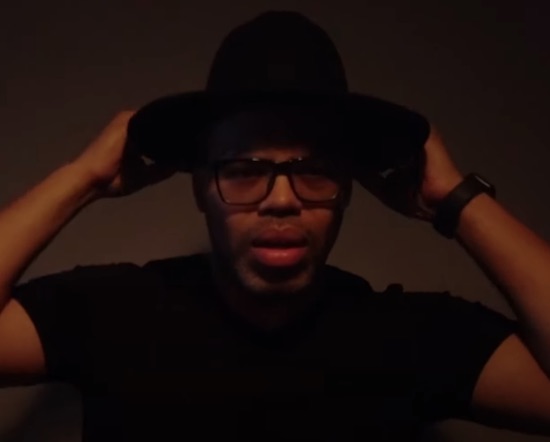 Eric Roberson needs no introduction to SoulBouncers and fans of indie soul music. The man is widely referred to ask the king of the genre, and he is one of the hardest working men in it, too. Even during a global pandemic that's had the world paralyzed for weeks on end, Roberson's creative juices have flowed like a raging river while isolated at home with his wife and young kids. Earlier in the month, he dropped his new album Hear From Here, recorded in his home studio during the early days of the quarantine, and now he ends April with a music video for his latest single "Already Knew You."

Adhering to strict social distancing guidelines, Erro is a one-man gang as both the star and director of the "Already Knew You" visual. Yes, you read that right. He decided to get behind the camera for his first go at directing a music video, and he does an exceptional job. We find Eric standing in a darkened room against a taupe-colored wall in the clip. He's dressed in a simple, plain black t-shirt, but he rocks a rather fetching hat that arguably steals the show. Roberson passionately sings into the camera as he spits some smooth game and introduces himself to the object of his affection who he's trying to give all his attention to. Eric brings the drama as the screen fades in and out to black and he plays with light and shadows. Erro emotes into the camera, at once sincere and entertaining for the duration of the video's five-minute runtime.

After watching this visual, we think that Eric can proudly add the title director to his lengthy resume. Take a look at E in action, and find "Already Knew You" on his album Hear From Here.