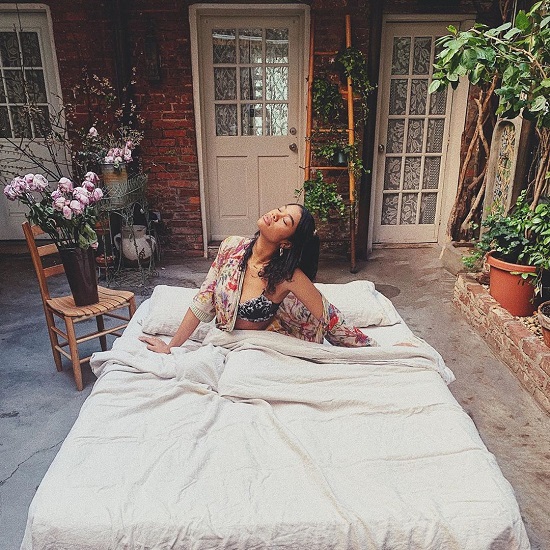 Amber Mark put a little angst in her R&B the last time we checked in with her. Her cover of Nirvana's "Heart-Shaped Box" had enough soul to make us sway and enough grit to almost make us bang our heads. For the second entry in her COVERED-19 series, the singer opts to drop an original new track called "Waiting."

Where "Heart-Shaped Box" had some bite to it, "Waiting" is surprising soft and flowy. The soundscape is based around guitar and atmospheric synth notes that make the track feel as if it's floating on the air. It sets the scene for Amber to make a plea for the one she loves. "You're like forever / And so am I / Anticipating when you'll be more than in mind," she sings on the opening verse. "It can't be measured / I'm feeling like / I would give up everything just to call you mine." While she's willing to open herself up like never before, it seems she'll have to remain waiting for her prince to come.

Amber also released a short music video to accompany the new track. It shows the singer lying on a bed in a courtyard as she tries to sort out her feelings. That's it, that's the concept. Something so simple should seem, well, boring. However, Amber seems to capture the dreamy feeling of the track perfectly. It's almost enough to make us all lovesick, too.

"For me, making music in the COVID-19 quarantine has probably been the only positive to come out of a tragedy like this," the singer wrote in the video's description. "All the pressure I normally feel when working on music is lifted. And I just have this f**k it mentality. People get to really see you in your most bare state and vice versa. That’s the beauty in the music I’m making right now. It’s just me whipping up whatever I’m feeling. Keeping it minimal has been the key mentality for me and just having fun with it. I used to stress so much about visuals and the message I was sending with my music. I’ve learned a lot about myself already during the quarantine. And hope to keep this mentality going when all of this is finally over."

This new burst of creativity has us seeing Amber Mark in a different light. We imagine that you will, too, when you listen to "Waiting" and peep its short video right here.


TAGS:  amber mark, audio, Nirvana
Previous: dvsn Release New Album ‘A Muse In Her Feelings’ & Keep It Mysterious With Snoh Aalegra In ‘Between Us’ Video Next: K. Roosevelt, BJ The Chicago Kid & Arin Ray ‘Bloom’ On This Remix