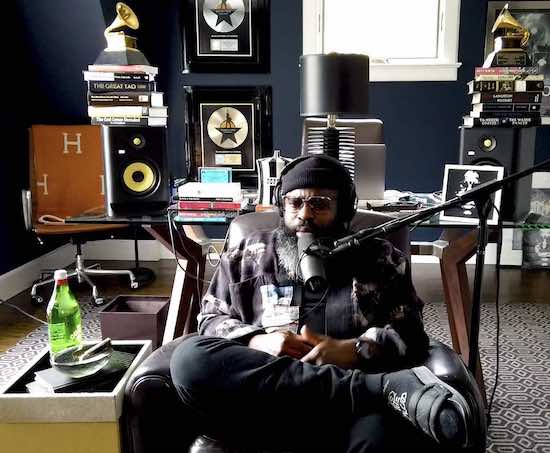 If there's one silver lining in the midst of the current COVID-19 lockdown, it's made people get a little more creative with how they deliver their product to the musical masses. NPR's Tiny Desk Concert series is the latest to jump into the fold by converting their popular series to Tiny Desk (Home) Concerts. The first artist to hop on board is none other than The Roots' lyrical mastermind Black Thought.

Filmed in the comfort of his home without his usual backing band, the intimate series gets even more intimate as Black Thought (flanked by a set of GRAMMYs and a couple of platinum certifications) delivers nearly 20 minutes of never-before-heard material. He kicks things off with "Thought vs. Everybody" over a brooding Sean C beat. The Philly emcee quickly makes light work of the track as he effortlessly breezes through the song.

He pauses briefly to provide some insight into the origins of his next track, "Yellow," which will be featured in Black Thought's upcoming Off-Broadway debut, Black No More. Based on a 1931 novel by George S. Schuyler of the same name, the song is written from the perspective of a black man who decides he only wants to center his life on the color yellow, including his women. Black Thought admits that penning the song proved difficult for him at times. "As a proud Black man, writing this number really caused me to dig deep creatively and it challenged me," he reveals. "As you'll see from the lyrics, I had to connect with feelings that I've never personally felt."

He closes things out with "Nature of the Beast," where he's joined remotely by the Portland-based duo Portugal. The Man. Also produced by Sean C, Black Thought recalls traveling to Portland to record the song with Portugal and knowing immediately that they had created something unique. "At the time we did it, we knew we had something. It felt special but it's become so much more meaningful since that collaboration," he explains about the song's timely message. Both "Thought vs. Everybody" and "Nature of the Beast" are set to appear on the third installment of his Streams of Thought EP series.

Sit back and enjoy these new sounds courtesy of one of Illadelph's finest before heading over to The Roots' YouTube channel to stay on top of the exclusive content they've been dropping during these quarantined times.


TAGS:  black thought", George S. Schuyler, Portugal. The Man, Sean C, the roots
Previous: Little Brother Gets Reflective In ‘Everything’ Next: Pink Sweat$ Is Ready To Roll On ‘Ride With Me’