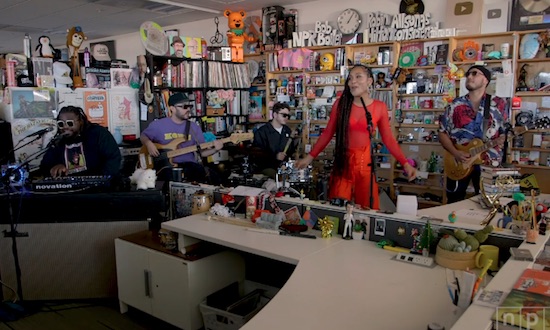 Long before they released their star-studded self-titled debut album last year, the Free Nationals served as the band for multi-hyphenate megastar Anderson .Paak. The four-piece powerhouse accompanied him on multiple tours around the world, as well as on his 2016 performance on NPR Music’s Tiny Desk Concert series, which has the distinction of being the most popular in the series’ history. Just under four years later, the band would return to make their solo debut and serve the room full of excited staffers with all the groovy goodness fans everywhere have come to love them for.

With Ron Avant on keys and vocoder, Jose Rios on guitar, Kelsey Gonzales on bass and Callum Connor on drums, the band kicked off their performance with "Beauty & Essex." Originally a collaboration with Daniel Caesar, rising songstress India Shawn put her own sultry spin on the sexy track while Avant got busy on the talk box. Decked out in a radiant red ensemble, India also took the lead on their performance of "On Sight," the third single from the album. Cheeky Andy surprised the audience and joined the band on drums and vocals for a performance of “Gidget.” They closed out their stellar set with another surprise appearance, as reggae artist Chronixx joined them and performed "Eternal Light."

Watch Free Nationals’ Tiny Desk Concert below and, if it hasn’t already been in heavy rotation, now would be a great time to revisit this tremendously talented band's album.