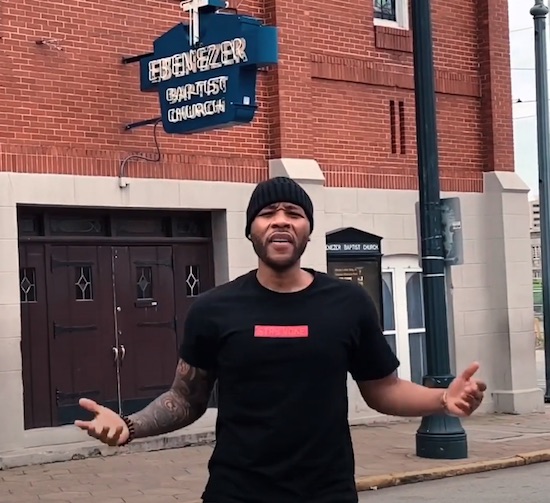 While many artists have had to put projects on hold, Gene Noble is moving forward with his first EP since joining the artist roster at Hidden Beach Recordings. As the first new artist to sign with the label in several years, the album is cause for celebration. But for his lead single, "Too Many Lost (Stand Together Mix)," the singer-songwriter isn't in a celebratory mood – not when there's so much at stake.

Initially, "Too Many Lost" was released last November by producer/drummer Gorden Campbell, with Noble providing vocals and Scott St. Patrick dropping pointed bars. The musical missive spoke out against injustice and police brutality in the Black community. Now, the song has found new life with Gene's "Stand Together Mix." As seen throughout the poignant visuals – partially filmed on the formerly empty streets of Atlanta (side-eye to Gov. Brian Kemp) – the artist repurposes the track as a tribute to essential personnel, an honorarium to the deceased and a scathing rebuke of the President's mishandling of the crisis from Day 1.

"This wasn't originally the song I was going to release as my first single," Noble admits, "but I felt really strongly about creating this project to capture what we're all experiencing now with the many lives we're losing to COVID-19....take social distancing seriously & give thanks to essential workers. #StandTogether"

Show solidarity by listening and sharing the message of "Too Many Lost (Stand Together Mix)," then head to your favorite digital retailer to add it to your permanent collection. Keep up with Gene Noble on Twitter and Instagram as the Bounce-Worthy alum prepares to release his EP later this year.