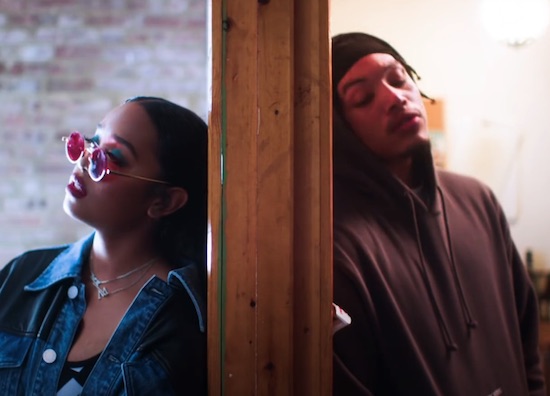 Before going viral on TikTok with his song, “A.M.,” Lonr. was already topping charts in the background as a singer, songwriter, rapper, producer and a few other titles. However, he is most recognized for his work with H.E.R., helping him scoop up two GRAMMY Awards thanks to his work on her self-titled album. She returns the favor by showing up on his latest single “ Make The Most.”

On “Make The Most,” Lonr. and H.E.R. try to move past the puppy love stage and put some realistic expectations on their love affair. There is some joy and some pain, but they both agree that you should let the person you love know it. “I want to grow old with you, make the most with you, that’s the goal,” he expresses over laid-back production and layered harmonies. H.E.R. offers a woman’s perspective on the second verse, stating, “I could use some time / Whatever you want, just say the word / We can do the time / Lock away the key if you prefer.”

In the video for "Make The Most," the focus is on Lonr. and his lady who spend some quality time together, but in between moments of caking, there are brief glimpses of her sad and in her feelings. When H.E.R. comes into the picture donning her trademark shades, it's just to share some scenes with Lonr. The clip ends with him and his girl on a date at a carnival. But when the couple drives off into the sunset, it’s not quite the happy ending we were hoping for. According to Lonr. in an interview with Fader, “The idea behind ‘Make The Most’ was simply that we only have one life to live, so with whatever or whoever it is that you love, make sure you make it known… Make sure you chase it, because tomorrow isn’t promised.”

Lonr. is onto something because if there's anything we've learned during this global crisis it's that no one is promised tomorrow. Show some love to Lonr. and H.E.R.'s “Make The Most," which will be on his debut EP, Land Of Nothing Real, hitting streets on April 24th.


TAGS:  audio, H.E.R., LONR
Previous: Pink Sweat$ Is Ready To Roll On ‘Ride With Me’ Next: Kevin Ross Launches ‘The Interim Series’ With Covers Of Stevie Wonder & John Mayer