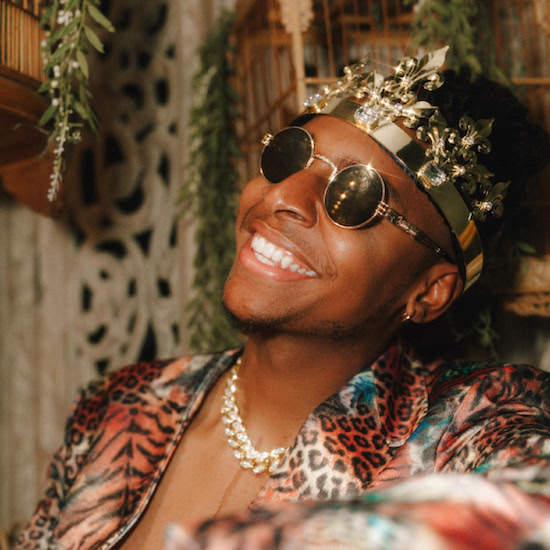 After going on a not-so-humble "King's Rant," Masego has decided to chill on the flexing for his new single "Veg Out (Wasting Thyme)." As a matter of fact, Uncle Sego just wants to chill all the way out and do absolutely nothing, which we're not the least bit mad at.

Described as a "piano-driven trap plea for rest and peace," Masego is kinda over turning up and just wants to turn down. "I wanna veg out / I don't really care what ya talk bout / I just wanna waste some time / I just wanna rest my mind," he sincerely sings on the chorus, which he opens the track with. The laid-back song sets the perfect mood for chillaxing while we're in quarantine mode and enjoying this forced downtime.

We get to see what Masego's quarantine looks like in the music video for "Veg Out (Wasting Thyme)." Sego and his friends somewhat practice social distancing and rock face masks as they kick it around his Los Angeles crib. We peep him singing into his iPhone as a camera with a fish-eye lens follows his moves around the house. He strolls past one of his homies tickling the ivories on a grand piano into the living room where the words "Veg Out" are spelled out in gold jewelry on a side table and in stacks of money on his white couch. From there, he takes us into the kitchen where the words are spelled out in various fruits and vegetables, vitamin bottles and even red Solo cups. He's sheltered in place with a fun bunch who shoot at each other with toy weapons and play basketball with a kiddie-sized hoop set up in a bedroom. Masego and his crew are bored in the house like the rest of us and used that as inspiration for this creative visual that complements the song perfectly.

Relax, relate and release for a spell and spend some time listening to "Veg Out (Wasting Thyme)" and watching Masego and friends in action in the video. Word on the street is that Masego has more new music to come later this year. Now whether that means more singles, an EP or an album are on the way remains to be seen, but we'll gladly receive anything this SoulBounce fave decides to bless us with.


TAGS:  audio, Masego
Previous: Lion Babe Gives Us The Energy Of Their Live Shows In ‘Into Me’ Next: Russell Taylor Shares What He Wants To Do ‘Come Morning’