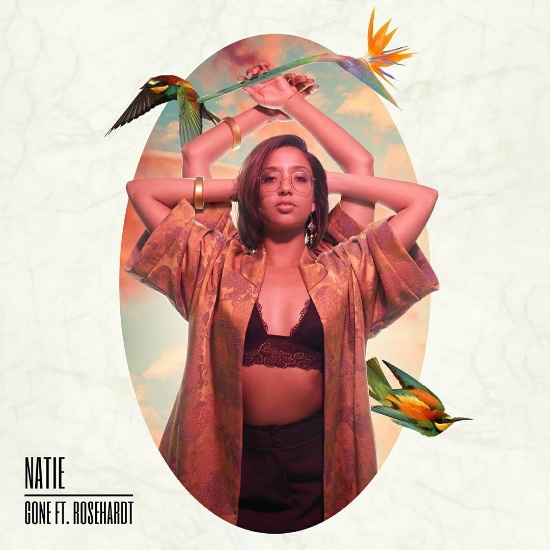 With a resume that boasts working with Beyoncé and Jay-Z on their On The Run II Tour, Nathalie Barret-Mas who performs under the name Natie has made some major moves in her music career. Known primarily as a violinist and vocalist, she'll soon spread her creative wings on her debut project, the EP In The Key Of Fall. On the upcoming collection, listeners will get to hear her writing and production on songs such as "Gone," the EP's first single that we're giving you an exclusive first listen to.

Natie laments a lover who has left her high and dry on "Gone." She reflects on the relationship and tries to make sense of what happened. "I reminisce on how you took care of me," she fondly sings on the first verse before painfully breaking down on the chorus. "But now you're gone, gone, gone / Left me here alone and I knew you were done, done, done / You left memories and an open wound." After Natie makes her feelings known, featured artist Rosehardt comes through from the perspective of her ex on the second verse. Sure, he remembers the good times that they shared, but he makes it clear that he's moved on and over it. "Did you deserve it? / In time the pain will be worth it," he bluntly sings his cold-blooded lyrics over production from Natie, Kins aka Cameron Thompson and Edson Sean.

"Gone" actually almost didn't see the light of day according to Natie. "It was the one track I nearly completely gave up on several times," she admits. "I took the song to some of the best musicians I know to try and record it, and it was an epic fail." She pressed on, however, and linked up with Kins who helped pulled the song and the project as a whole together. "This track is the perfect illustration for 'Great things take time.'”

Press play below to get into SoulBounce's world premiere of "Gone." There's much more where this came from on Natie's 4-track EP, In The Key Of Fall, scheduled for release on April 17th. Stay in the loop with what she's up to musically on her website, Facebook, Instagram and SoundCloud.


TAGS:  audio, beyoncé, Cameron Thompson, Edson Sean, jay-z, Kins, Nathalie Barret-Mas, Natie, Rosehardt
Previous: Raven-Symoné Takes Us For A Ride In Her ‘SPACETRUCK’ Next: Elijah Blake Shows Us Why He Has Trust Issues In ‘Frenemies’