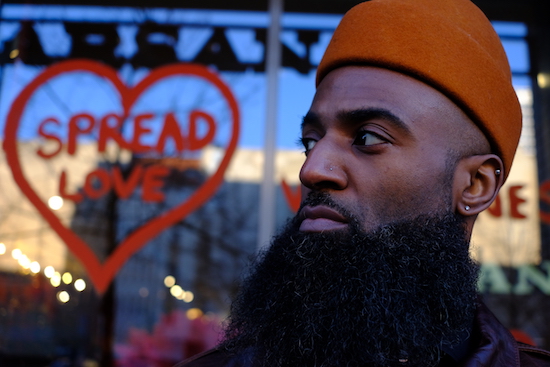 Singer-songwriter Olivier St. Louis has been giving us the soul we've been looking for well over a decade now — including when he first stepped onto the scene under the moniker Olivier Daysoul. However, it's been over three years since he blessed us with his EP Ever since the fall. Olivier hasn't forgotten about us, though. In fact, he's been working on a new project for his new label First Word Records that is set to be released this year. But first, he wants to reintroduce himself with his new single "Runnin' Wild" and we have the exclusive premiere of the track just for you.

"Runnin' Wild" finds Olivier St. Louis tapping into elements of blues, soul and rock to give us his own take on the genre. The driving rhythm of the track's drums and the guitar coupled with the urgency in Olivier's vocal delivery make you sit up and take notices of the track immediately. "Chasing, chasing, chasing news lately / I never could find the time to strategize losing you," he sings on the opening verse. "Wanna be lost not found." He goes on to sing of the anxieties and burdens of the world making him want to "self-destruct, repeat" and attempt to break free.

"In a world where anxiety and panic reign supreme over the majority of society's normalcy, very little is understood by the common person on recognizing it, let alone knowing how to harness it. One thing is understood. Anxiety and the mechanism of focus are intrinsically linked," Olivier said about the song in a statement. "Anxiousness in its controlled form is to a degree beneficial. Involuntarily shifting our focus on to potential danger in our environment. A crucial mechanism for survival. But what happens when you can't turn off the fail safe? What does that chaos look like?"

"'Runnin' Wild' is a song about the endless pursuit for the center," he continued. "A physical projection of inner turmoil committed by false alarm. When you lose your grip on anxiety's leash, how do you get it back? Where's your fail safe?"

You can look for Olivier to officially release "Runnin' Wild" on April 3rd and pre-order the track via Bandcamp now. But first, listen to our exclusive stream of the single right now.