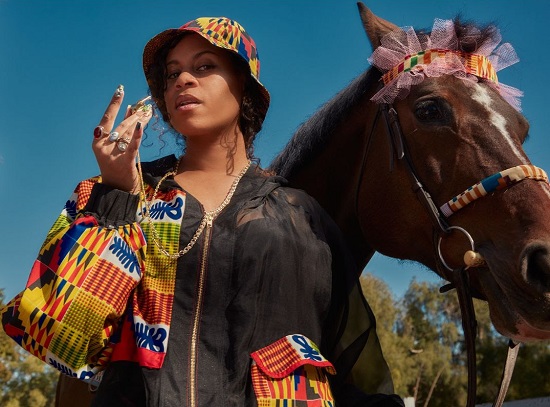 Aluna Francis has been perhaps best known as one half of British electronic music duo AlunaGeorge. Now the singer is stepping out into her own spotlight under the mononym Aluna as she vies for solo stardom. She's signed a deal with LA's Mad Decent records and is set to release her debut album in the near future. But first she's reintroducing herself with new track "Body Pump."

While the music of AlunaGeorge was always engineered to make you dance, Aluna is doubling down on that notion with her solo work. "Body Pump" celebrates that fact with a dance floor-ready groove crafted with electronic elements that build throughout the song. The main groove is filled with shuffling synthesizers that underscore Aluna's verses. "Hold on / My body's pumping all night long." she sings. "I've been waiting for / Something like this / Body's pumping / I just can't resist." She loses herself to dance on the track, with everything hitting a feverish crescendo just past the three-minute mark as handclaps and drums sound off while Aluna vamps.

"Having enjoyed being the main ingredient to many successful dance records, I started wanting to create the whole dish. In the past when performing on the stages of my white male peers, I always felt like a visitor being one of the few Black women I could see, so it never fully occurred to me to claim dance music as my music, as an artist, even though it was at the heart of my connection to music," the singer said in a statement. "Then I looked at the history of dance music and saw how, for example, Chicago House, known as the invention of house music, was pioneered in the Black and Latino LGTBQ+ communities which gave me inspiration to stake my flag in the ground as a Black woman in dance music by taking control of production and songwriting with my own vibe."

Hopefully we'll get to hear more of this particular vibe in the coming months. Until then, get into Aluna's "Body Pump" right here.