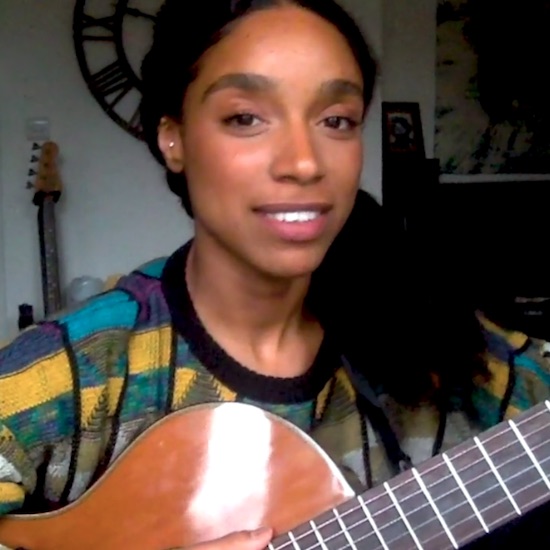 The current coronavirus pandemic might have slowed things down the world over, but as the old showbiz adage says, the show must go on. With so many artists set to release new albums in the coming weeks and months, the time is now to drop those singles and do some promo (especially with a mostly captive audience). Singer Lianne La Havas takes advantage of this by giving a one-two punch with a stripped-down performance for NPR Music's Tiny Desk (Home) Concert series and dropping the new single from her upcoming self-titled album, "Paper Thin."

Like "Bittersweet" before it, "Paper Thin" is an introspective and emotional track about love and the pitfalls that can come with it. She keeps the production from the track on the simple side, opting for an arrangement of guitar and drums that allow the song's lyrics to shine through. "Paper-thin / God only knows the pain you're in / But the future's bright /You've got God on your side, He's listening," she imparts on the opening verse. "Love yourself / Or else you can't love no one else / I know your pain is real / But you won't let it heal." The wise and poetic lyrics should hit home for more than a few, making this another winner from the British singer-songwriter.

"Paper Thin" is also the song she decides to open her Tiny Desk with. In stripped-down form, the song resonates even more, with Lianne's sincerity coming through clear in her delivery. She then delves back five years to her last album, 2015's Blood, for her track "Midnight." The song sounds just as lovely here as it does on the album (and perhaps even better thanks to the intimate surroundings she's performing in). She then brings it back to her recent single "Bittersweet" to close things out. Stripped of its epic production, you'd think that it would lose some of its verve. However, though she's not going for the bigger notes in the way she did during her stunning COLORS performance, there's nothing small about this version of the song.

We're sure this isn't the exact rollout that she imagined for her upcoming album. Still, Lianne La Havas has managed to wow us once again and have us anxious for what she's got coming in the near future. Check out both the single and Tiny Desk performance below and look for her album — which is available for pre-order now — to arrive on July 17th.