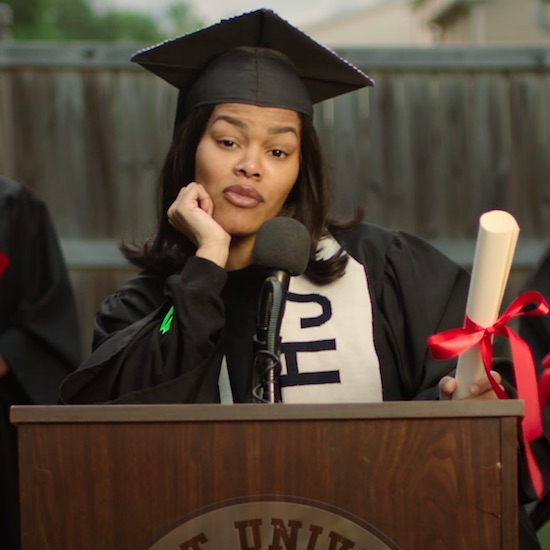 Singer, songwriter, dancer and Junie’s mommy, Teyana Taylor is getting ready to release a new album and the singles and videos show no signs of stopping. She gave us Afrobeat glamour in “We Got Love,” some sexy same-sex action with Kehlani on “Morning” and some throwback flavor on “HYWI” with King Combs. Now she’s sharing two more singles – "Bare Wit Me" and "Made It" – and a pair of contrasting self-directed visuals.

“Bare Wit Me” is a percolating slam jam where Teyana asks her lover to understand that she’s got trust issues. A good girl gone bad, she’s learned the game and has dudes wrapped around her finger, finding it hard to settle down with just one. “My heart's way too hard to manage, oh no / I can't give a n***a my trust (I can't) / Say he workin' to change that,” she sings. Meanwhile, in the “Bare Wit Me" video, Taylor takes inspiration from the golden age of Hollywood. The clip starts with an unnamed slow jam playing, as Teyana climbs on top of her husband Iman Shumpert laying lifeless in a hospital bed. She smothers any remaining life out of the poor guy, committing murder while fans watch on the big screen of a movie theater. The clip then transitions to Teyana and a few of her girls dressed in colorful trench coats in the back of an old school car riding out to defend herself against the accusations of murder. We then get a dance break inspired by Janet Jackson’s “Alright” video, with some stop motion camera tricks to enhance Teyana and her crew’s popping and locking motions.

On the flipside, “Made It” is a feel-good track that flips Juvenile’s “Back That Azz Up” into an anthem about achieving your goals and living in your blessings. “Head up and my heels high / This what life supposed to feel like” she boasts. For the video, Teyana honors the Class of 2020 with a virtual graduation ceremony. In her backyard, she gives the valedictorian speech to a crowd of virtual graduates, who are there via FaceTime on iPads. Baby Junie even joins in on the fun with a guest appearance. At the end of the clip, Teyana shares that the video was special for her because, as a signed recording artist at the time, she was homeschooled and didn't get to have a traditional graduation, either. She ends the clip with a very special video conference with some of the graduates.

“Bare Wit Me” and “Made It” will appear on Teyana’s next LP, THE ALBUM. The project follows-up the Kanye West-produced K.T.S.E., that was unfortunately plagued by being produced by Kanye West. But ever the multi-hyphenate performer and trooper, Teyana made magic happen with the project and continues to grow as an artist. We can’t wait to see the next level she achieves when THE ALBUM drops this summer.