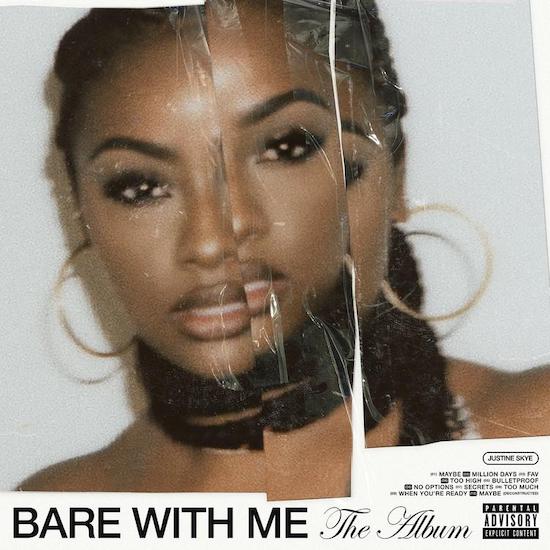 As she puts the finishing touches on her collabo EP with legendary producer Timbaland, singer Justine Skye breathes new life into her 2019 EP Bare With Me with the release of its extended counterpart, BARE WITH ME: The Album.

In addition to including the original six tracks, including the sultry single "Maybe," Skye rounds things out with four additional songs, including the recently released "MAYBE (Reconstructed)." She also adds "No Options," "Too High" and "Million Days," all of which were co-written by the singer herself. "I've been writing my lil heart out so go dive into it. Let me know how you feel," she said via Instagram.

The new songs are in line with the vibes presented on the EP, with Skye delving further into the ins-and-outs of love. "Too High" finds her lamenting her dependency on an addictive love affair over a downtempo beat. Getting those feelings off her chest was the impetus for her adding on to last year's project. "I decided to add on to the Bare With Me EP, creating The Album, to finish out a cycle of emotions that I no longer feel," she went on to explain.

As previously mentioned, The Album serves as the prelude to her upcoming joint project with Timbaland. The project came to fruition after the two launched their Space & Time Sessions on Instagram in which they have been recording new material while quarantined in their respective home studios. With over 2 million views total, it's clear that fans are eager to hear more from this talented twosome. In the meantime, delve deeper into the mind of Skye to learn more about what makes her tick.

Justine Skye BARE WITH ME: The Album [Apple Music][Google Play]