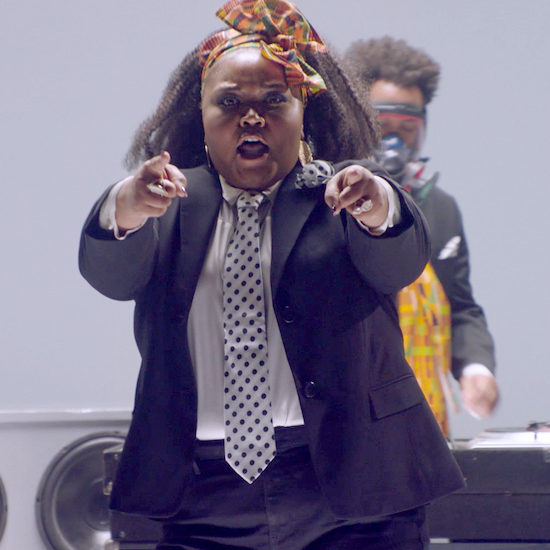 Sometimes, the reality is so absurd that it feels like you're living inside a comedy show. That's exactly what many of us were feeling this past Monday when the Democrat members of the U.S. House of Representatives and Congress decided to show their solidarity with Black people by taking a knee while wearing Kente cloth stoles. The comical attempt left a lot of us scratching our collective heads while adding it to the growing list of WTF moments of 2020. Well, it seems like the good folks over at Sherman's Showcase were somehow able to predict the future based on their latest musical skit, "Add Some Kente," which actually dropped back in May.

In the music video spoof, show host Sherman McDaniels (Bashir Salahuddin) and John Legend introduce "the first house song about Black history since 1992's Harriet Tubman tribute 'Follow Me'," in which the singer offers up suggestions on how people can add Kente to everyday items to show that they're down. The hilarious number then proceeds to add some Kente to Timberland boots, car rims, Lamborghinis and even the signature white attire for that white supremacist group (Kente Klux Klan, anyone?).

While the utter hilarity of the song's lyrics will have you in stitches, they are also catchy and you may soon find yourself singing "Panel by panel, it's black people's flannel" while busting out your best vogue moves to the bouncy house track. The jokes continue until the very end as the fictional singer "Sari Charley" thanks Kunta Kinte for creating the cloth even as a disclaimer scrolls across the bottom of the screen to discredit her claim. Though we're sure that there's no way that the show's creators and the song's writer Phonte Coleman could have possibly foreseen the events that culminated in Nancy Pelosi, Chuck Schumer and crew donning their Kente stoles, it makes the obvious pandering that much funnier just out of the sheer ridiculousness of it all.

"Add Some Kente" will be featured on Sherman's Showcase upcoming "Black History Month Spectacular," which will premiere June 19th at on AMC at 10 p.m. ET/PT with a follow-up airing on IFC at 11 p.m. ET/PT. We can only imagine what else the crew has cooked up for the special, but if "Add Some Kente" is any indication, we're in for a hilarious ride. In the meantime, bust a move as you witness life imitating art in the absolute crazinest way possible.