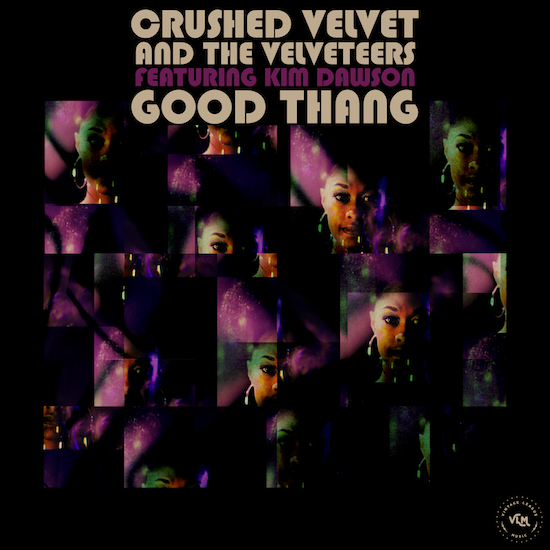 Artists often choose to spread their creative wings with side projects and collaborations. Look no further than Prince and his many monikers over the course of his career to in more recent years CeeLo Green and his Gnarls Barkley collabo with Danger Mouse. Carrying on the tradition is Alan Evans, widely known as a founding member of the group Soulive, who's decided to let his soul glow a little brighter under his alter ego Crushed Velvet and the Velveteers. Evans gathered together a few of his artist friends in the studio, including singer Kim Dawson, who has previously lent her vocals to the groups Matador Soul Sounds and Pimps Of Joytime, and the result is a fusion of classic soul and funk on the single "Good Thang."

Kim Dawson's robust vocals are front and center on "Good Thang" atop a sound bed colored with organ, horns, bass and tambourine. The live instrumentation takes this song to higher heights and is soul food for anyone missing that live music experience after being quarantined for months. Dawson meanwhile sings of a fly guy who catches every woman's eye on the first verse, but he makes it clear to all his admirers that he's off the market. "I got a good thang, good thang at home," Dawson wails on the chorus before singing about a fine woman on the second verse who is also spoken for and isn't interested in straying. Between the music and the lyrical content, "Good Thang" is a straight-up good time with a good message.

TAGS:  alan evans, audio, Crushed Velvet and the Velveteers, Kim Dawson, soulive
Previous: Lenny Kravitz Takes Us Along For The ‘Ride’ Next: Sy Smith Shows The Beauty Of Blackness In ‘Sometimes A Rose Will Grow In Concrete’