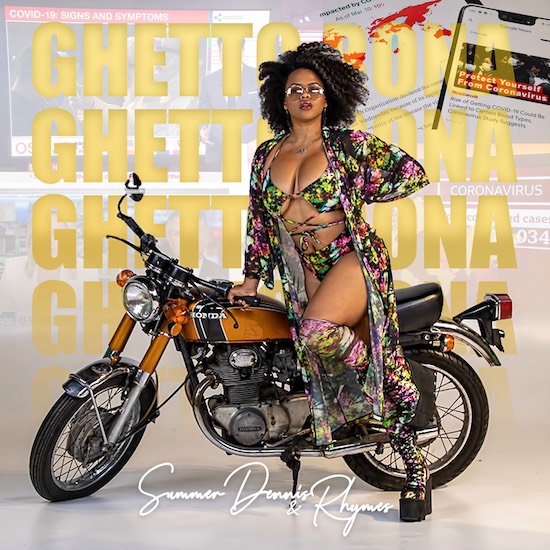 The year 2020 will go down in history for numerous reasons. Between the COVID-19 pandemic that has devasted many Black communities and families to the heartbreaking murders of Black men and women at the hands of law enforcement to the racist-in-chief who runs this country and has run it into the ground, 2020 has been on struggle. But what this year has revealed to us is that when it comes to the United States, all that glitters isn't gold. There are many hard truths that we're confronted with, and Summer Dennis & Rhymes address a few in their latest single "Ghetto Rona," which we're debuting in a SoulBounce exclusive world premiere.

When we were first introduced to the group Rhymes Band with lead singer Summer Dennis last spring, they were weathering a relationship "Storm" and now they tackle a storm of a different variety on "Ghetto Rona." Now a duo consisting of Summer and Bill Moore, the pair deliver a soulful indictment of America and flip the concept of "ghetto."

"For so long Black and impoverished communities have been referred to 'the ghetto' even though we live in a nation that can’t house its taxpayers, can’t feed its children, and imposes police brutality on its citizens," Summer and Bill state about the song's underlying theme. "How can a society with so little to offer refer to anyone as ghetto? We all know where the ghetto really is now, and it’s not race-specific. We can see the truth as clearly as ever."

Summer makes it plain as she repeats the lyrics, "I don't want to be in the ghetto," to open the song. Her voice is rich and full over Rhymes' lively live instrumentation. You feel her pain, passion and frustration when she sings, "All we get is all we have, we just existing / Had some dreams, but Rona took 'em when she creepin' / Trying to kill us, but we need to keep on living / Just another day of life that's unforgiving," on the second verse.

Listen to Summer Dennis & Rhymes' "Ghetto Rona" world premiere below then read the poem "What is ghetto?" submitted by the duo and take some time to reflect.