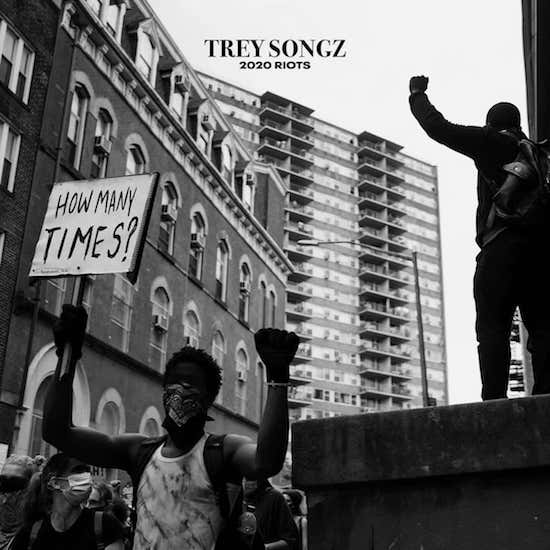 The streets have been asking for celebrities to speak up about the injustice of police brutality across the country. Not only to be accountable but to be inspiring. Some like John Boyega, Keke Palmer and Amber Riley have spoken out and joined the protests. Whereas some like Kanye West have smartly let their pocketbook do the talking. And some artists are channeling their inner Sam Cooke, Nina Simone, Donny Hathaway and Kendrick Lamar; their anger and their sorrow into their creativity and doing their talking on wax. Trey Songz joins the growing list of singers and songwriters who’ve written songs to support the movement with his new song “2020 Riots: How Many Times.”

Trey asks the important questions over a sound bed of piano and handclaps. “ How many mothers have to cry? / How many brothers gotta die? / How many more times?" he sings on the chorus, which opens the track. He continues on, addressing how Black people are often killed just minding their business and living their lives. “Playing in the park, taking your jog / Sitting on the couch, in your own house / Never seem to matter what we do / You think we don't matter, but we do.” But, even through all the pain, he provides hope in the struggle because, “We gon’ be alright because we always is.”

“How Many Times” premiered on D-Nice’s Club Quarantine this past Wednesday after he got a text from Trey Songz about the track while playing a set on IG Live. Heard it for the first time with the rest of his audience while waiting to hear if the remaining three officers in the George Floyd case would be charged. After playing the song back-to-back for a few times, Songz joined D-Nice on IG Live to speak about the song and his support of the Black Lives Matter movement. “We’ve been looking for an anthem this entire time, bro and you gave us one,” D-Nice remarked.

During the interview, Songz shared how the song came about and his experiences with police brutality. “One morning, three or four nights ago, I woke up in the middle of my sleep, like I really couldn’t sleep and it was hurting my chest…. I hit my producer, Troy Taylor… and I said, ‘We gotta make music that really touches the soul, that really addresses what the world is feeling right now. Especially our people.” Trey also shared that, “As a young Black man, so many Black men, I don’t know the actual percentages, but I’d go as far as to say 9 out of 10 of us have been the victims of police disrespect if not brutality. Or treated less than equal by those who are supposed to uplift us and be peace officers.” Over the course of the interview, Trey shared thoughts, feelings and truths about living in America as a Black man under the threat of the police, echoing the same thoughts, feelings and truths that most of us have lived through. The interview was a touching moment that showed us not only another side of Trey Songz but provided a sense of healing through mutual experience and empathy.

Proceeds from the release of Trey Songz's “2020 Riots: How Many Times” will go to the families of George Floyd, Breonna Taylor and Ahmaud Arbery. Listen to possibly the greatest song that Trey Songz has ever written below and watch his complete interview with D-Nice on Instagram.