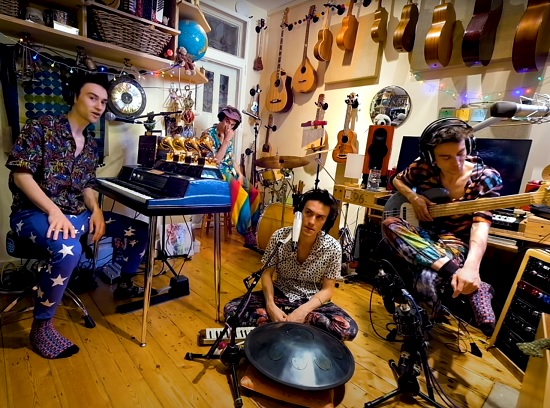 Jacob Collier must be a magician. That's the only way to explain the sorcery that the 25-year-old multi-instrumentalist and vocalist is able to conjure up. Case in point, his recent appearance on NPR Music's Tiny Desk (Home) Concert series. Or should we say "appearances." That's because he appears in the homemade video as his own drummer, bass player, pianist and backup — giving us four times the Jacob in one dose.

Yes, we're sure there was (probably?) some camera trickery going on to make this happen but it's still mesmerizing to watch. Jacob plays seamlessly with himself while he goes through a collection of tracks from his forthcoming album Djesse Vol. 3. He kicks things off with a rendition of "All I Need" on which he fills in for guests Mahalia and Ty Dolla $ign effortlessly while showing off his impeccable chops. After a brief argument with his selves about who the real Jacob Collier is, he then segues into funk/jazz hybrid "Time Alone With You," once again doing his part along with the work of a guest (in this case Daniel Caesar). The cut once again shows just how damn talented he is as he seems to snatch the harmonies and rhythms out of the air. For his final trick, he trots out his latest single "He Won't Hold You." The track, the studio version of which features the lyrical play of Rapsody, is a heartfelt song exploring loneliness (which is apt for the times we're going through). Opening with a choral harmony, the song then wraps around that base to create a lament about missing love and hoping for another chance.

Like we said, we don't know how Jacob Collier does what he does, but we can't help but find ourselves under his undeniable spell. Check out both the studio version of "He Won't Hold You" and the entire Tiny Desk (Home) Concert performance to see what we mean and look out for Djesse Vol. 3 to hit stores on August 14th.