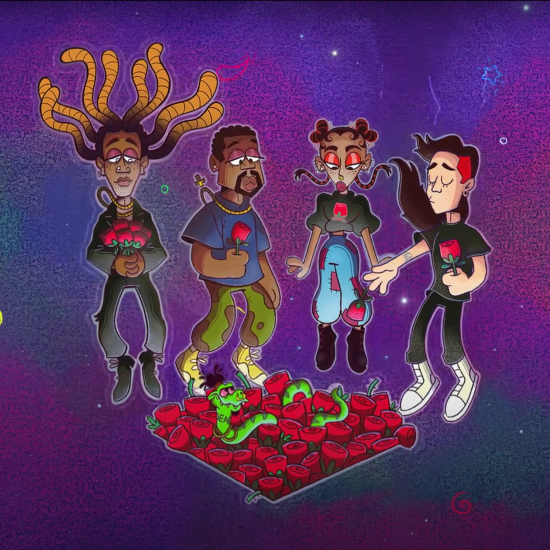 Ego Death is described as a “complete loss of the subjective self-identity.” This transcendent or terrifying state of being is often achieved through the use of psychedelic drugs. That sounds like something that West Coast artist Ty Dolla $ign has intimate knowledge of and lets us know just how much he knows about it in his new single. For the tripped-out track, he’s recruited the man who probably needs the biggest ego death in the world, Kanye West, alongside FKA twigs and producer Skrillex to each share their own take on the experience.

Produced by Skrillex, the track is percolating beat reminiscent of Chicago house with some synths and vocal samples added for good measure. In this posse cut, “Ego Death” takes on a few different meanings. Ty talks about using drugs to get closer to the woman in his life but also taking a blow to his ego when she walks out of his life. Meanwhile, Kanye talks his ish about people talking a good game but not backing it up, his own struggles with his ego and his political aspirations. Towards the end of the track, Skrillex lets the turntables do the talking for him and twigs has her own inner battle with herself. The track closes out with a strong message via sampled audio that says, “You will have to sacrifice something to be great.”

In the animated lyric video directed by Emonee LaRussa, the fearsome foursome get very trippy. Each artist has their own spotlight as they go on their own Adult Swim meets School House Rock adventures.

“Ego Death” is the latest single from Ty Dolla $ign’s long-awaited follow-up to Beach House 3. He’s released several singles, including “Purple Emoji” and “Hottest In The City.” Not to mention, we’re still waiting on the full release of the track “You See It,” his social justice anthem which was previewed weeks ago. Ty has assured fans that the album is done and gives us the indefinite release date of “coming very soon.”